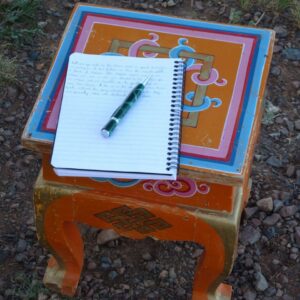 Leslie: So, can you describe TSL – who and what it publishes and why?

Anne: We focus on novels, non-fiction which takes my fancy, and anything to do with the Great War in Africa through our imprint GWAA (Great War in Africa Association). We also have a drama arm – TSL Drama. So if asked what do we publish, our answer is ‘pretty much anything’. This requires some explanation.

TSL doesn’t believe in labels. I taught in Further Education in the UK for fifteen years and saw how young and old can achieve against all odds given a little faith, confidence and guidance. In addition, having lived on both sides of the Apartheid fence, I am convinced that ‘correcting’ names are just as damaging as the initial labels. Everyone is human, deserves respect and to have a voice.

So TSL believes in understanding and working respectfully with an author’s reasons for writing and publishing. As a result of this approach, in 2016, following requests by some playwrights, TSL started TSL Drama with a review board to advise on whether plays and monologues get published. We’ve also published a poetry book and will be doing another as a special request for one of our existing authors who co-ordinated a group to edit the work. I never got to meet the author, David Ferris. Despite our best intentions, he died about two weeks after he signed the contract for his books and the day the proof copy arrived – everything has been set up so that Macmillan Cancer Care benefits.

TSL is in it for the long haul – quality takes a long time to filter through and gain momentum. How many of the ‘books which live with you’ took a long time to become popular? We’re a firm believer that for every writer there’s at least one reader, and working together with the writer we go on the hunt for that reader.

Leslie: What difficulties and successes stand out for you so far?

Anne: One of TSL’s underpinning mantras is ‘A 4-way win’ – by this we mean that all participants in the book process (author, reader, publisher, retailer) get something from the book at the best price possible. As you can see this has resulted in distributors being left out of the equation. This provides the challenge for getting into bookshops. Most bookshops, including independent ones, insist of using one of the big-name distributors who insist on taking a (large) cut for posting out the book. When challenged on this issue, two high street retailers told me that it eases their workload having to deal with one distributor rather than many. So, I as the publisher have to a) pay the distributor to ease the retailer’s workload b) provide the retailer with books on a sale or return basis with no responsibility for anything happening to the books in between. The outcome is that it’s still down to the publisher and author to market the books. Something in the equation doesn’t balance here.

TSL is therefore working with local authors (#SupportingLocal) and print on demand and ebooks. We believe in print on demand as it generally keeps costs down and you only print what you need thereby saving trees and hopefully carbon footprint too. With technology breaking down trade borders, we can market and distribute to anywhere in the world at relatively affordable prices. (#LocalGoesGlobal) Currently TSL uses Lulu for printing and online distribution as it provides the best value for money and seems in line with TSL’s ethos.

The international aspect is important for TSL. So we have an imprint for the Great War in Africa Association. Being the co-ordinator of the Great War in Africa Association, I became quite aware of the challenges facing authors who had spent years painstakingly researching and writing to get published, especially if they were not UK or US based. The money they were expected to invest was exorbitant, including some their life savings. In some cases, even when the author paid upfront for publication, the publisher refused to believe there was a market for the material. When they did publish, the editing was poor and not always best suited to the material or readers/users of the material. As most of this group are scattered around the world, it became apparent that print on demand was the best way forward and as a researcher in the field myself, I could do something to help bring hidden stories to light which would help others in a similar position. This has been extended to novels.

Leslie: How and why did TSL Publications begin?

Anne: TSL began in 2013 following the attempts by one of the directors to self-publish. This, and my experience of getting my own books camera-copy ready for a well-respected academic publisher, prompted us to start experimenting with publishing. A couple of local writing groups provided some authors who were struggling to get published and in October 2014 after having discovered a novel on World War 1 in Africa which hadn’t been published since I’d first heard about in 2010, we took the plunge into the dark world of publishing. October 2014 is when the real journey began.

In the few years TSL has been going, we’ve undergone some radical changes, finding ways to maintain our principles in a cut-throat industry where publishers are generally seen as the big ‘baddies’ making all the money and not giving a fair deal to their authors. We minimise our use of platforms owned or controlled by huge names in the industry. TSL loves supporting the minority voice and helping get the unknown into the known sphere, however when blogs and tweets link directly to the big names we reluctantly press delete. This almost feels a bit hypocritical as TSL books are available through those very channels – not by choice but because we’d be doing both our authors and readers a disservice by not having our books available through that retail arm despite our authors (and ourselves) losing out on a large percentage of revenue. As a result, we’ve had no choice but to rework the costings of our books on these platforms. We’ve got much better deals on the tslbooks.uk website as do our authors. In fact, for us, the more you buy direct from our authors, the happier we are as they’re benefitting most that way.

Leslie: What has TSL learnt? How has it changed?

Anne: TSL is becoming more market savvy and confident about what it stands for and will not embark on a contract, or terminate one, if we feel the relationship is not right. Our emphasis is on partnership – this doesn’t mean we don’t have challenging discussions or disagreements over points, what it means is that we (TSL and the author) are open and trusting enough to have the ‘grown up’ conversations to do what is best for the book and the end-user, the reader.

One of our authors was recently told by a bookseller that they would consider stocking the book if it was more professionally designed and was in A5 size with white backgrounds to the images. My questions to the author was ‘what is professional?’, ‘who is your audience?’, ‘what is the purpose of your book?’, ‘will it work as an A5 size given the recipes included etc?’, ‘And what does the intended audience think?’ This last question resonated with an experience I’d also had with the same book – another bookseller couldn’t stand the colours; however, a children’s reading group was absolutely positive about the books in the UK, as was another in South Africa (#LocalGoesGlobal). An adult then suggested the recipes all be grouped together at the end of the book … one child specifically commented in their review that they liked the way the recipes were part of the story. We went with the child’s view. TSL won’t follow the rules of the book trade if it’s not best for what the author intends and what the reader likes. However, we are experimenting with this collection to see what is preferred.

This is just one example of how we work with our authors. We envisaged a house style, but that went out the window as we recognised that each book requires its own style.

Leslie: In your experience, what creative and inter-personal skills go into being a publisher?

Anne: You have to be a jack of all trades and hopefully a master of some. Specifically, a good eye for detail especially for proofing, editing and setting. Being content to work on one’s own but also be comfortable engaging with individuals and groups. Finding creative ways to overcome potential barriers – one of our authors does some illustrations but doesn’t like doing faces, so we’re experimenting with half drawings which children can complete and colour in. If they do so, we’re also encouraging them to email them to TSL and some might get used in future books. Hopefully this will help young people who aren’t that keen on books engage a bit more and achieve as the author has.

Leslie: What are your challenges, when it comes to dealing with authors?

Anne: We need to meet all our authors, or at least speak to them on the phone. It helps in giving a voice to those who don’t use social media. But it can be quite a task balancing the attention each book/author gets when the author doesn’t respond because they can’t. The other related challenge is finding a way to keep all our books being promoted equally as the portfolio grows. I regularly hear authors bemoan the fact that traditional publishers have given up on promoting their work as little as a year or so down the line.

We encourage all authors in the UK to join ALCS.

In next week’s special blog for Easter, WRESTLING WITH MY ANGEL, Leslie Tate describes his childhood spiritual experiences.

4 thoughts on “AN INDIE PUBLISHER’S STORY”