In the second part of my interview with Jo Clutton she talks very honestly and openly about her family and depression, her medication crisis and how that led to her recovery.

Leslie: Can you describe, please, the beginnings of your depression, and how it has changed and developed over thirty years.

Jo: As a child, I was very moody, and my mother would say: “What ARE we going to do with you?” I can remember crying when away on holiday, and claiming I was homesick. I didn’t know why I cried, and my mother lost patience with me. There is a history of depression in the family. My dad could remember his mum, Kitty, lying on the bed when he came home from school, and he said that his granny used to look after him and his sister, my aunt. Of course, this was during the 1930s, when virtually nothing was known about mental health issues and sufferers were dismissed as over-sensitive, as I was by my family. I was teased a lot, and told off for over-reacting! A double whammy. My moods were never talked about or discussed.

In my teens and twenties I was okay, on the whole. I worked in studios and travelled, then I met my future husband. I knew he was right for me, but when we got engaged, I was scared and tearful. My mother was thankfully supportive. “Poor Graham,” she said. “Never mind, you’re not married yet. Give it time.” We visited my husband’s family to announce the engagement, but I continued to feel afraid. It was when we began driving to our honeymoon destination that I began to cry and didn’t stop. I calmed down as time went on, but there were certainly other periods when I became depressed and tearful for various reasons. 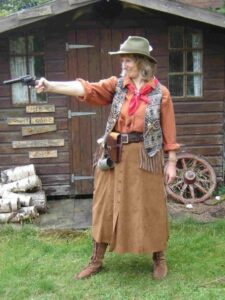 I did a three-year illustration course which I enjoyed, but afterwards, when I became pregnant, I felt depressed. But it was literally the moment my daughter was born, after midnight, that postnatal depression gave me a corker. I felt horrible. I had Samantha next to me in her cot and the thought of ‘my daughter’ sounded weird. I put on a brave face when my parents visited, but the moment my parents-in-law arrived, I cried. They valiantly took over looking after Sam while I tried to make the decision as to whether or not to go home. After that, a year of postnatal depression finally led to my doctor giving me an antidepressant. It relieved me of the worst of depression and I coped with young parenthood, although, even had I not had depression, I would have been bored silly. Motherhood didn’t suit me. We had wanted family, and the grand plan had initially been for me to do part-time freelance artwork, and writing, but that plan went down the plughole. So I worked in the voluntary sector with a baby in tow and was out of the house as often as possible. I loathed being at home.

The medication’s effect lasted for twenty years, but that didn’t prevent my anxiety becoming obsessive. For instance, I couldn’t watch anything western-related on the TV without feeling tearful. Talking therapy explained why I felt this – mainly a desire to be part of that era and the unconscious thought that, being female, I couldn’t be. When our son was born, three years after our daughter, the depression didn’t hit until a couple of weeks, but this time a different medication mix made me worse, landing me overnight in a psychiatric ward. After that I had a changed prescription, but then it stopped working, causing such intense anxiety about ‘living history’ camping that I had to stop doing it for a few years. 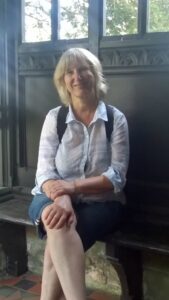 So – we’re up to three years ago. The depression had developed again and the psychiatrist prescribed Prozac just before Christmas. On Christmas Day I was intensely depressed, retired to bed, and over the next couple of days I became suicidal. My husband took wonderful care of me, and our son, a young adult living with us, kept my husband going. I lost track of what happened – possibly nature’s way of protecting me – but I do remember one of our doctors arriving and me telling him to do something about ‘this f*****g feeling!’ My husband went onto the street and the neighbours came to help. One of them had worked for a mental health team and as soon as we contacted them they ordered me off Prozac. The next we knew was an appointment on New Years Day, first thing! Meanwhile our doctor had prescribed an anti-psychotic, which helped, and our daughter arrived from the Midlands to look after us all. The team wanted me stabilised first, before suitable medication and a course of cognitive behavioural therapy.

Throughout all this, my own family were unaware of anything remiss happening. My husband’s family helped pull us through, but my older brother was caring for my ninety-three year old father and my ninety year old mother, unaware of anything, had severe dementia and was in a home. It has hurt me in the past that my own family have had no dealings with my depression, but their constant ‘pull yourself together’ and ‘you should do this and should do that’, plus naggings throughout my life had done its damage.

In the end, on a medication combination known as ‘California Rocket Fuel’, followed by cognitive behaviour therapy, I began to feel better than I’ve ever felt before. A year after the crisis, my parents died. My father first, followed, around five days later, by my mother. I felt released. I had loved them dearly, and yes I grieved a little, but I had got used to their absence, and, frankly, the obligation to see Dad as he grew just plain nasty towards me had gone. I also felt released from the obligation to associate with a family who had simply not understood me or treated me well. So I decided, at sixty-two, to negate the most negative people from my life. And I don’t feel in the least guilty about it! I am in touch with my older brother, as he is the one who does have some understanding of me and has been sympathetic. The other, younger one, I barely contact, although I do have some fondness for him and will text occasionally.

Leslie: Can you explain the root cause of your depression?

Jo: The depression in my childhood, I believe, came about clinically – essentially a lack of the chemical serotonin in the brain. I now know that my family’s attitudes, a ‘drip drip drip’ of negativity over sixty-plus years added to my clinical depression. “Little Miss misery.” My mother used to call me. “The doctor must be fed up with seeing you,” she said in later years, when I told her about a visit. I remember her telling me, “You never clean your own house properly.” Her attitude to my work was, “You’re not a career girl,” and when it came to getting engaged she asked me, “What do you want to do a thing like that for?” I was in my forties before I finally answered her back! When I did, it felt so good.

In later years, when my brother was caring for my dad and under stress, I began to explain my medications to my sister-in-law. He told me to shut up, adding, “You always do this – spoiling everything!” I told him I was leaving and he responded with, “Well, f***k off, then!” When I rang him later, to find out how he was and ask him about his comment, he simply said, “Oh, that…. Water under the bridge.” No apology, nothing.

My husband has to constantly remind me what my family are like. My sister-in-law was repeatedly sarcastic towards me, and the other sister-in-law left me off my niece’s wedding invitation because I wasn’t ‘good enough’. My wonderful husband’s family, by contrast, are lovely. I have said I’m divorcing my family, and, to a certain extent, I have. And bugger – I feel so much better!

Leslie: What’s the story of how you’ve come to terms with your depression? What worked during that process, what didn’t?

Jo: I simply didn’t accept depression. The medications worked, to an extent, but not always. So at one point Zoloft was prescribed to help with sleep, but it just kept me awake! But it was Prozac that finally did me in.

Leslie: What are your views on ‘therapeutic’ writing and art?

Jo: Therapeutic creativity certainly works for many. Whenever I felt the need to explain anything that was causing me grief, I’d write it down for my husband to read. That did help a lot. Now I encourage anyone who’s suffering mentally to ‘let it all hang out’ and talk, talk, talk. It’s not self-indulgent when you suffer from depression. Of course, it wasn’t the way of my parents’ wartime generation, but today, depression and other mental health issues are becoming more and more understood, and treatment is more and more available. And thank goodness for that! 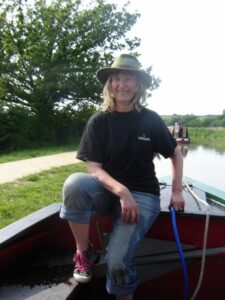 As concerns art, I simply wasn’t interested in art when I was depressed, but now I’m getting back into it, thankfully. I’ve started an art group of creative friends in my home, which is a miracle, because I hated hosting anything at home, and I’m doing a sculpture course locally, which I’ve always wanted to do. Art therapy often centres around creating a work of art – it doesn’t matter how ‘good’ or ‘bad’ it is – that expresses how you feel. Personally I don’t create with that vision in mind, it never came naturally to me. My art is ‘normal’, if you like. Not angst ridden, or with hidden messages. I enjoy art for art’s sake. As for ‘confessional’ writing: all authors need to get out, meet people, go places and broaden their perspective – which also helps with moving away from too much ‘self indulgence’.

Next week I interview stand-up comedian Alasdair Beckett-King, winner of the Leicester Mercury and New Act of the Year Shows, 2017/2014.