During childhood, Beth, my protagonist in my most recent novel ‘Violet’, pins up these sayings on her bedroom door: 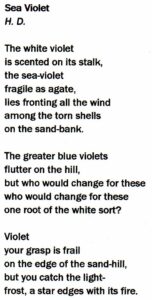 Their source is Beth’s gran ‘…a big-jawed woman whose sepia-tinted photo stood on the cabinet beside Beth’s bed’. But Beth, when asked by her dad (perhaps disingenuously) where they came from doesn’t want to tell. Already she’s a student of life, quoting her gran about the importance of books, but when it comes to her ‘sayings’ she wants to share them but not their source.

Perhaps she’s shielding her grandmother’s memory or needs to impress, but whatever the reason, there’s a gesture involved, a kind of magical defiance of limits and boundaries – and this is the beginning of Beth the Storyteller.

So the scene continues:

In writing this I had to find a way to move from Beth’s memories of her gran to the children in action – and to do it smoothly, without the reader noticing. After many attempts, the link I wanted came with the phrase ‘voiced her tales’. It was short, sounded natural, and gave me something to hold onto while I switched direction.

But scene changes don’t always come so tightly-worded. Quite often I try the slow blend, adding in words to smooth the way or I’ll bring in someone talking. But if it’s a big jump I’ll use the line break or start a new chapter. Even so, standard transitions are hard. Too much explanation and the writing stalls, too little lead-in and it ends up feeling forced.

On the other hand, if the transition’s good and gives back in itself then the novel is lifted, taking on a quality where things just happen. The goal is immersion. A kind of seamless, dream-like progression where everything fits, the feelings stand out and there are no skipped pages.

If anything, that’s even harder.

2 thoughts on “BETH THE STORYTELLER”