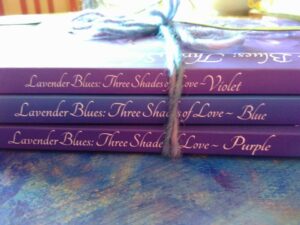 Today’s blog offers two extracts from ‘Violet’ my new novel, plus violet coloured wool, lavender sprigs, and sweet-scented books!  In the photograph ‘Violet’ is on top of the pile because it had just arrived from the printers, a month ahead of its publication date. Underneath are the two other ‘Lavender Blues’ novels. Though linked, all three books stand alone and can be read independently.

The first extract is a dream-sequence.

VIOLET IN BRIEF: The passionate, late-life love of Beth and James begins in 2003 on a blind date in a London restaurant. Attracted by James’s openness, Beth feels an immediate, deep connection between his honesty and her own romantic faith. From then on they bond, exchanging love-texts, exploring sea walks and gardens and sharing their past lives with flashbacks to Beth’s rural childhood and her marriage to a dark, charismatic minister…

7 thoughts on “VIOLET SIGNED AND SCENTED”