I interviewed Bertin Kalimbiro from Goma, in Congo, about Programme d’appui à la résilience et adaptation face au climat (PARAC), the environmental organisation he founded, and the ways his community are coping with climate change.

Leslie: How is the ecological and climate crisis affecting where you live?

Bertin: For more than two decades now we’ve experienced an unprecedented disturbance of the growing seasons. In the past we had the dry season from June to August and then January to February, while the rainy season took up the rest of the months. But now we can’t distinguish these seasons, because most of the year is in drought. We’re also experiencing landslides caused largely by wind and rain erosion, especially in the territories of Masisi, Kalehe, Kabare. These landslides attack even Lake Kivu by pushing into it. We also observe soil infertility in several territories. 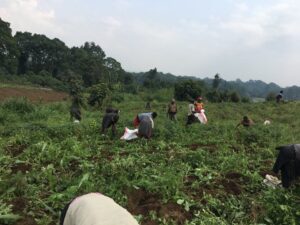 Leslie: Can you describe, please, what you do to protect the environment and ensure safe water and food security?

Bertin: In terms of environmental protection, Programme d’appui à la résilience et adaptation face au climat carries out forestation and reforestation activities in the territory of Kabare in South Kivu and in the territory of Nyiragongo in North Kivu where 17,000 trees were planted during the year 2017 and 2018. PARAC volunteers committed themselves to carry out these reforestation activities. This also included students from the local schools. Apart from reforestation, we also carry out environmental education in these areas, especially in schools and youth clubs.

To help people with washing we first produced a product called MAAS for the cleaning of houses and toilets. We celebrated World Water Day on March 22 with the inhabitants of the territory of Nyiragongo territory DRC for whom water is a rare commodity. Lake Kivu is about 25 km from the territory down a steep slope,so people suffer to get water.

To improve food security, PARAC initiated kitchen gardens in the city of Goma, first in the households then in the schools. Subsequently we publicized malnutrition in the territories of Masisi and Kalehe.

Leslie: How has your own upbringing helped you to look after the planet?

Bertin: I’m an environmentalist, living in a home where our shared passion is to protect nature. I created this organization working with colleagues who understand the dangers to our society of poor access to water and food security as well as the wider ecological crisis affecting my region and the entire planet. The majority of my team are rural development technicians and agronomists who research bacterial diseases that attack plants.

Leslie: What are the community norms where you live? How do they differ from Western norms?

Bertin: The norms of my community are of solidarity. All the communities of Kivu – the Shi, Havu, Hutu, Nande, Banyanga and others – are only concerned with survival. To achieve that we work together as a community. Our way is more personal and less driven by profit than large-scale mechanized agriculture or factory farming.

Leslie: What are the cultural traditions that drive the work of your indigenous musicians, dancers and other artists?

Bertin: The musicians of the region copy western styles. However, some are more traditional, dealing largely with morality themes. These musicians dress mostly in traditional dress to illustrate their culture, 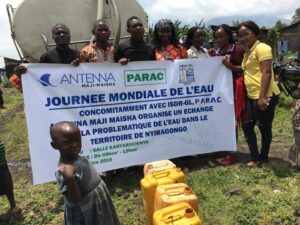 Leslie: How are the attitudes towards and roles of women changing/developing in your society?

Bertin: It’s a slow process getting women to participate more in decision-making bodies. This is due first of all to women’s low level of involvement in the country’s political activities, their lack of confidence, discrimination and other evils that make parity difficult to achieve.

Advocacy and support initiatives are being undertaken with non-governmental organizations and state institutions, but the level of involvement of women and the most vulnerable remains low. Although 30% of political positions are reserved for women, in practice this percentage isn’t achieved On the other hand, there are women who apply as deputies and pass, and the question of equality is treated with serious attention.

Leslie: What have you learned from working on the land, please?

Bertin: Working with rural people is something that is close to my heart, I like working with farmers because they show us how to do things differently – so we learn from their lived experiences. One thing is sure, we do not teach rural communities but we can help them to develop. It is they who have the knowhow! Nature also has its realities: the more we advance, the more it changes – and as we go forward, the forests are transformed into a living environment.

5 thoughts on “SAFE FOOD & WATER FOR ALL”