I interviewed Debbie Jenkinson whose graphic novels explore the triumphs and frustrations of everyday life. Debbie‘s work includes Remorse, a long-form comic about a girl trapped in a call centre job for ten years and Ghosting; a graphic thriller about a missing Italian chambermaid and a Bus Eireann driver who fears he’s been ghosted.

Debbie speaks about the “magical triangulation” that occurs in comics, between the image, the text, and the reader. “I think our brains take in pictorial information in a different way…a more natural way. There’s something really immersive about reading a comic, that’s different from reading prose…It’s like looking at the world through someone else’s eyes.”

Debbie is the co-founder of The Comics Lab (now a part of Dublin Comics Arts Festival) and board member of Illustrators Ireland.

Leslie: Can you explain why you set your graphic novel Ghosting on an Irish bus, please?

Debbie: Ordinary workplaces and the relationships that can grow out of daily contact with colleagues fascinate me; the compromises people make to make a living, the amount of life itself they have to trade for a living. My first idea was to have the main characters Steve and Dennis wash skyscraper windows on a rig over the city, but how much better I thought then, to make their job one where they encounter the general public every day. A job that swings between the routine and chaotic, tedium and occasional moments of pure magic.

Leslie: What were technical and psychological challenges you had to overcome in order to produce the final textual/visual version of Ghosting?

Debbie: Over the years I’ve figured out a work process so technical challenges aren’t so much of a barrier – a relief, because there are so many other moving parts that have to be pinned down with a comic. As for psychological ones, the initial idea and characters come easily but I find the writing part the most challenging. It’s hard to fill that blank page, to lay down the foundation and constraints for your story to play out on. That takes a while and can feel like a grind. Once I have that all mostly banged together I am off making pages, one or two a day, adding things as I go, and that’s satisfying. It was a long book but I just took it one day at a time. Just like a country song. 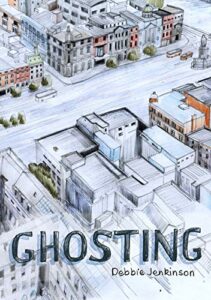 Leslie: What were your deeper intentions in creating Ghosting? Why did you use the graphic novel format for this story?

Debbie: I wanted to make a story about ordinary people – my starting point is that everyone has a story to tell and the untold stories of normal folk are the easiest to relate to, and are less travelled territory. Steve and Monica are not exceptional people, but I wanted to see how strong they (and we) could be when forced by circumstances. The female character is the agent of change instead of the male; she doesn’t need to be saved by a man, she’s brave and clear-headed and she knows what she has to do. I could talk forever about the power of the graphic novel format but to keep it brief, magic happens when you put text beside images in a sequence; it gives a sense of place and atmosphere that the reader intuits rather than processes. It has the potential to be an experience that gives the reader an unique insight into the mind of the creator; I think it lends itself well to this sort of atmosphere-laden story.

Leslie: Tell us about your other graphic story Remorse. How does it relate to Ghosting?

Debbie: Both are set against a workplace, a thing nearly everyone can relate to. I think (or hope) they express the moments of everyday angst, tedium and ecstasy of working and living, the public and private personas that we have, the compromises, the allegiances, the office politics that we all recognise. (My next one is set in a workplace too, actually, a pharmacy, this time, it seems I’m not done yet! Heh.) The fact we spend so much time with our colleagues makes for a particular strange familiarity where character can reveal itself and can drive the action.

Leslie: Can you describe the support you’ve had and what organisations like Illustrators Ireland, Dublin Comic Arts Festival (DCAF) and The Comics Lab do, please?

Debbie: My comics people! HEART EYES. Without them, there’d be nowhere for my book to go, actually, without the support for Remorse, I wouldn’t have made this book. I wouldn’t have my people. Over the last 8 or so years, a lively indie comic scene in Dublin has blossomed, helped by many people putting events on, including Dublin Comic Jam, The Comics Lab, which is a meet-up with speakers and drawing sessions I co-founded with my pal Sarah Bowie. Then when Matt Melis started DCAF, a comics festival that runs quarterly, The Comics Lab joined that, bringing collaborative drawing and book swaps and events to it. Illustrators Ireland is a professional guild that supports illustrators in Ireland; I have met all sorts of talented, lovely and supportive people there, we’ve had all sorts of events, Drink n Draws, exhibitions, live readings. Well, until the pandemic, of course.

Leslie: How has Dublin, as a cultural, psychological and physical location, inspired you? Did you work from photos, sketches or your memory?

Debbie: Hugely. I mostly drew the pages in Ghosting at home during lockdown last year, and I pored over the pages of the Dublin I hadn’t seen for months; it was the next best thing to being there. It’s my hometown, it’s flawed and lively, messy and dysfunctional, it’s a place of banter and camaraderie, and I love it, it’s my home. I used Google Maps (brought to us by our Techno-OverLords), which allows you to view the town from above in 3D and from all angles. When I used to do storyboarding my boss would talk about this kind of establishing shot giving a sense of spying on the characters, which I like, but also I’m attracted to the idea of their tininess in the landscape. I am interested in the idea that any one of these cars or buses could contain our protagonist, because we all are living out our stories. Our lives are inherently dramatic, it just depends on how you choose to frame them.

Leslie: In what ways do the stories and characters of Remorse and Ghosting relate to your personal story and experiences? How did you edit life to create your narrative/events/people/graphics?

Debbie: I have picked and chosen elements from my life freely, mostly because they interested me; they seemed rich veins of experience to mine. I did have a job in a software company in the 90s, (actually the open plan office is inspired by the one I worked in and some of the minor characters are very loosely based on colleagues) but this is to make it easier for me to believe in the world I’m making, and if I do, maybe I can make it believable for the reader too. The kernel of the idea for Ghosting was inspired by being ghosted in my twenties, an experience I’m grateful for now, (because it makes me appreciate the constancy of my lovely partner now), but at the time caused me confusion and pain. And I lived in Northern Italy for some years in my twenties and that is where I got my reference for that part of the book. My twenties seem to have given me a lot of inspiration that’s useful now, ha! Happiness writes white, they say.

Next week I interview novelist and poet Helen Murray Taylor who talked candidly about her mental health experiences and her related comic/serious debut novel The Backstreets of Purgatory.