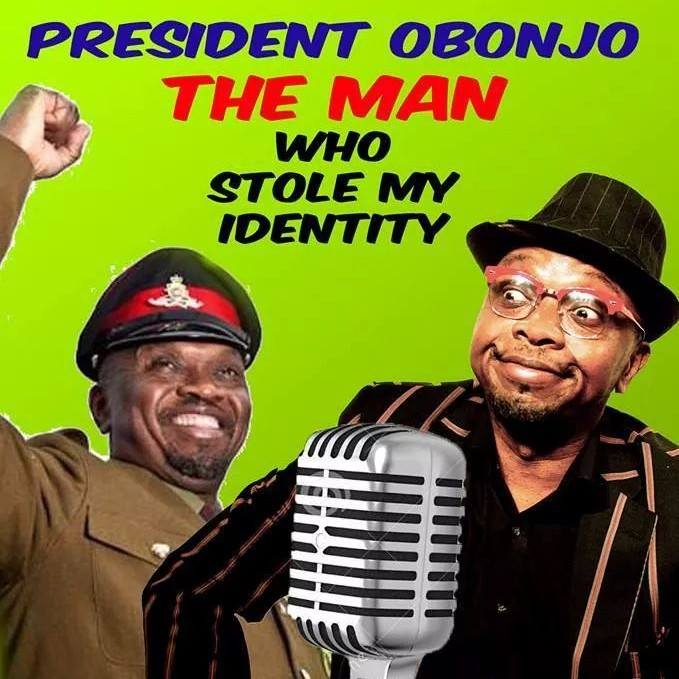 INTERVIEWING PRESIDENT OBONJO – WILL THE REAL COMEDIAN PLEASE STAND UP

I interviewed President Obonjo, who is a well-known, larger-than-life performer in alternative stand-up. As The President, he comes on stage in full uniform, requiring his audience to stand in his presence and listen to absurd tales of his iron rule over the ‘Lafta Republic’. Behind The President is a very different persona, Benjamin Bankole Bello, a quiet man whose identity has been stolen by The President and whose wife is in love with the other man.

Obonjo reached the finals of the New Act of the Year 2016 and received a five-star rating at the Edinburgh Fringe last year. He is currently through to the semi-final of the English Comedian of the Year. In the past he’s been Luton Comedian of the Year and winner of Beat the Gong, Beat the Frog, Bath Comedy Gladiators & Hastings Comedian of the month. He often plays to audiences of 150+ up and down the country.

Leslie: Where do you get your sense of humour from?

Obonjo: The quick answer is I think it came from my parents, they had sex in a funny position. I’ve been meaning to ask them, maybe they took a happy pill, or watched a comedy show before getting on with the business. 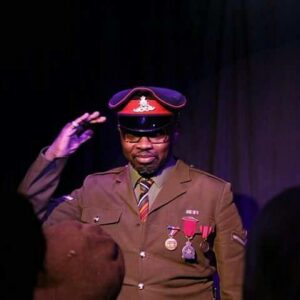 Leslie: I like that :).  And the long answer? How did your sense of humour develop? Which comedians do you admire/have influenced you?

Obonjo: I see myself as a naturally funny person – material comes naturally, I don’t have to think too hard. The comedian I most admire is Richard Pryor because he had a natural ability to make people laugh. Oh yes, he wrote material but there was more to him than just the material. Other comedians who have influenced me… I would say politicians and dictators around the world… Yes, politicians are not comedians but, seriously, I admire Marcel Lucont.

Leslie: You want to take risks, rather than simply serve up what’s commercially current. What are the different styles you see on the circuit at present?

Obonjo: I don’t want to criticise the circuit but I’m drawn to comedy that is madcap, out of this world and clever, crazy comedy that goes against what is expected. I dislike repetitive and predictable comedy. I am attracted to comedy that produces new ways of seeing things and breaks the rules, comedy close to the bone but still funny. I think the best way to describe it is comedy like Picasso, abstract comedy, confusing but funny where the viewer/audience admires what the comedian does and is left wanting more.

Leslie: How do you try to make your act individual/different? 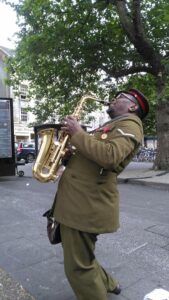 Obonjo: By not doing what others are doing. I aim to stand out, dare to be different and take risks. I knew from the onset that I wanted to create an act that would challenge the status quo. Go against what the establishment expects.

Leslie: Where did you come up with the idea for your two personae? How do they help you to find humorous ideas?

Obonjo: When Obama came on the scene eight years ago I was sitting watching him elected as President and all of a sudden my wife, being an obsessive fan of Obama, made me think I have got to get my wife back. I recalled that Obonjo was my nickname back in Nigeria and I thought if I added President to it…, then I am on a run. I was also fascinated by how Obama engaged his audience. I did something similar by being funny online and my fan base grew as a result, even though they had not seen me perform onstage.

Interestingly enough over the years and recently I have tried to perform as ‘myself’ Benjamin and people think I am playing another character… lol, very funny. Obonjo is inside me, Benjamin is the real me. But I sometimes think that Obonjo has taken over because he performs off stage and on Facebook, so I do realise the two need to be separated…

Leslie: What have you learned from gigging on the circuit?

Obonjo: Have a prepared set, haha, but be ready to deviate and give your audience what they want. In my view audiences want to be entertained and I see comedy as a form of entertainment not a lecture, I want my audiences to sit down after a gig the next day, laughing at the jokes they heard from me, now that’s what I call comedy… 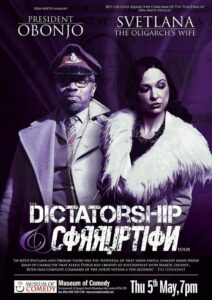 The first few years of gigging across the country has made me improve my act, but it’s also important you have a strategic plan about what gigs you need to do, progression gigs and do your research on gigs.

Leslie: Are there some anecdotes which give a sense of the best and worst of life on the comedy circuit?

Obonjo: Best: almost at every gig people come to me and address me as ‘Mr President’ even though they know it’s just a character. This gives me so much pride I feel I have achieved something. The reception from comedy promoters before a gig at times feels like I am visiting another country as President and the citizens of my host country can’t wait to meet me, more like Obama lol. Worst: I think of being heckled for being black and being mistaken for another black comic and being praised for doing two sets when it was two different black acts. That was an eye-opener for me.

Leslie: Why do you want to be a stand-up comedian? 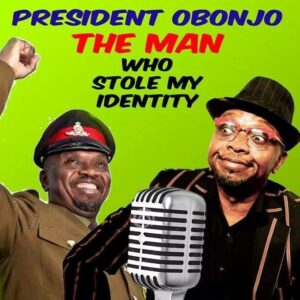 Leslie: What advice would you give to someone starting out in stand-up comedy?

Obonjo: Be prepared to be self-critical, to be criticised, and keep writing, keep gigging, stay true to yourself. Get to know those who control the industry, but don’t compromise your values and integrity, Be nice to others along the way and have fun. Finally, have a life outside comedy, socialise with your non-comedy friends.

Leslie: You can book here for President Obonjo’s June 22nd gig at BerkHAmsted Comedy Club’s Pre-Edinburgh night. You can find details here of the Hastings Fringe Comedy Festival, where he appears on the 24th June 2016.

PrevPreviousSELKIE MOON AND THE AUTHOR AS MEDIUM
NextHOW DEEP IS SCI-FI?Next
On Key