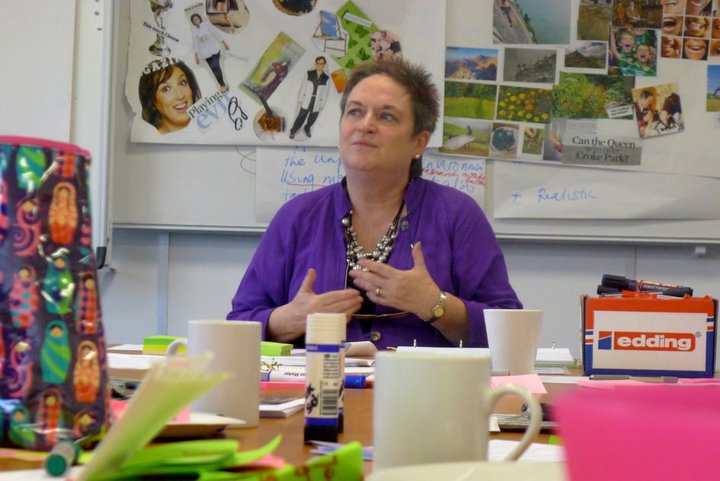 ROSEMARY HILL – THE PLAY’S THE THING

I interviewed Rosemary Hill, innovative theatre director and founder of two drama companies. Rosemary began as a drama and English teacher and head of department in a large secondary school,  She moved into radio and television working as a producer and director with a particular interest in education and development. In each of these creative fields Rosemary has stayed true to her own artistic agenda. I wanted to find out how she has done that, and what she has learned on the way.

Leslie: You worked as a TV director, producing documentaries covering difficult personal situations in ‘hot spots’ around the world.  What sticks in your memory from that period?

Rosemary: Yes, I’ve been to some interesting places in the world for the BBC making programmes for TV and radio. I have many stories, but the one I tell the most is when I was in Sri Lanka and the Tamil Tigers bombed the central bank area which also had many hotels including the one I was staying at. Only one half was put out of action so the staff bravely carried on. The day after we arrived we were due to film in a school. We had full permission of course from the Ministry of Education and the school was very happy. The programme as a documentary called ‘The Qualification Chase’ and it was looking at how exams dominate education systems. We had just flown into from Japan where we had been filming for ten days.  We wanted to look at Sri Lanka  as a contrast. We also wanted to look at how students had been affected by the war in the North.  We arrived at the school and started filming the students arriving. Then suddenly, everything changed.  Several parents were uneasy and became quite hostile. We tried to calm them, but the police were called and I was arrested. The rest of team were also brought to the police station. I was interrogated for four hours. Apparently the Tamil Tigers had said after the bomb that their next target would be an educational institution. I was seen as the producer/director working with them! The parents thought we were recceing for the next bomb. I was asked to sign a confession. It was all in Sinhalese  and of course I didn’t understand it. I asked to ring the Education Minister Mahendra Ranaweera ( I still remember his name) and the police wouldn’t let me at first. They relented later and I rang him on my mobile and thankfully he was there and supported me! The police listened as he was an important man and then their tone changed. They offered me a cup of tea and a cake. It was as if they had invited me to tea!  The team were quite scared by this time so I drank the tea very quickly ( it would have been rude to have declined). We were then let go and we travelled north to Kandy which was deemed safer than Colombo and we made the programme there.

Leslie: You founded The Play’s the Thing Theatre Company in 2008 ‘in order to stage theatre from the classical canon, modern work and to work with new writers’. Can you describe your role,  how the company has developed and how that’s been achieved?

Rosemary: I wanted to have a professional company which would stage thought-provoking work. I already had the inclusive company Pepper’s Ghost which started in 2004  and had staged many productions and continued to do so. The professional company started with a production of two monologues from ‘Picasso’s Women’ by Brian McAvera. I played Olga his first wife.  The Milton Keynes Community Foundation gave us a small grant.  It was a success and we carried on from there with productions such as  ‘Frozen‘ by Bryony Lavery , ‘Talking Heads’ by Alan Bennett and many more.  We also started to run master classes and workshops with top practitioners  and these also proved to be a great success. We have now built an excellent reputation for high-quality work which has attracted funding.  We are proud of all the productions  of course but ‘Frozen’ does stand out as it is such a controversial subject. We also did ‘A Wedding Story’ by Bryony Lavery and took that to London where it got great reviews. We’ve always been interested in new work as well and in 2014 as part of Milton Keynes Fringe we produced and directed Neil Beardmore’s “Pristine in Blue’.  We also sponsored it.   We have just staged four One Act Plays  as part of a festival for new playwrights. Three out of the four were women as we are also keen to push women playwrights.

Leslie: I notice that The Play’s the Thing training workshops use the Meisner Technique. Can you describe the technique, why your company prefer this to ‘method acting’ and what that choice means for the productions you stage?

Rosemary: The Meisner workshops are only part of a whole range of workshops – we have done workshops on voice, improvisation, stage combat ( which leads to a qualification), Shakespeare, Stanislavski, Theatre of the Absurd, Commedia Dell’arte, film and screen acting.  Meisner is  described as “living truthfully under imaginary circumstances”.  It is based on listening and reacting to the other actor. It really is very powerful. You often see actors who are not doing this. They  are only concerned with what they have to say and do. Meisner is a very unselfish way of acting.

Leslie: On The Play’s the Thing website, you are personally described as having ‘vast experience of making teacher training materials for the BBC, Open University, National College For School Leadership and The Department for Education’. What are your ideas on teachers’ training and the best approach to drama in the classroom?

Rosemary:  I worked as a teacher for many years and I love teaching.  I am at heart a teacher. At the BBC I was working in education and of course being creative. I work from the basis that everyone is creative. I also run creative thinking workshops for business.  I like to get people to think creatively. Sometimes they have been too used to working for exams or at work doing things a certain way. Creative thinking is about connecting the seemingly disconnected. People are good at it, but they think they aren’t. It’s great showing them that they are and kindling that spark and confidence again.

Leslie: You are an exceptionally organised person with a strong creative drive. Do you have views about why this is unusual in the creative arts and what can be done to make schedules less hand-to-mouth while retaining originality and spontaneity?

Rosemary: I think many people are both – that is creative and organised. My view is you are more effective being creative if the basis is there – that is things have been organised – space, some structure to start things off etc. It’s about creating a good  creative learning environment.  Chaos doesn’t bring the best result. This results in time wasting and loss of energy.

Leslie What have you learned about human nature from your wide experience of other cultures and your work in the UK?

Rosemary: I’ve learned that everyone has a story to tell which is fascinating. I’ve learned that we should never under estimate the power of the human spirit and the will of humans to survive – that can lead to bad things as well as good things, of course.  I’ve also learned that happy people don’t do bad things. It’s unhappy people who do bad deeds through fear and ignorance. Education (not necessarily formal) and the arts can transform people’s lives for the better. That why one of my favourite plays is ‘Our Country’s Good’ by Timberlake Wertenbaker because it celebrates the power of the arts. It’s about a group of convicts ( from the First Fleet) who put on a play and how it changes them. The ending always sends shivers down my spine. It is so uplifting and life-affirming.