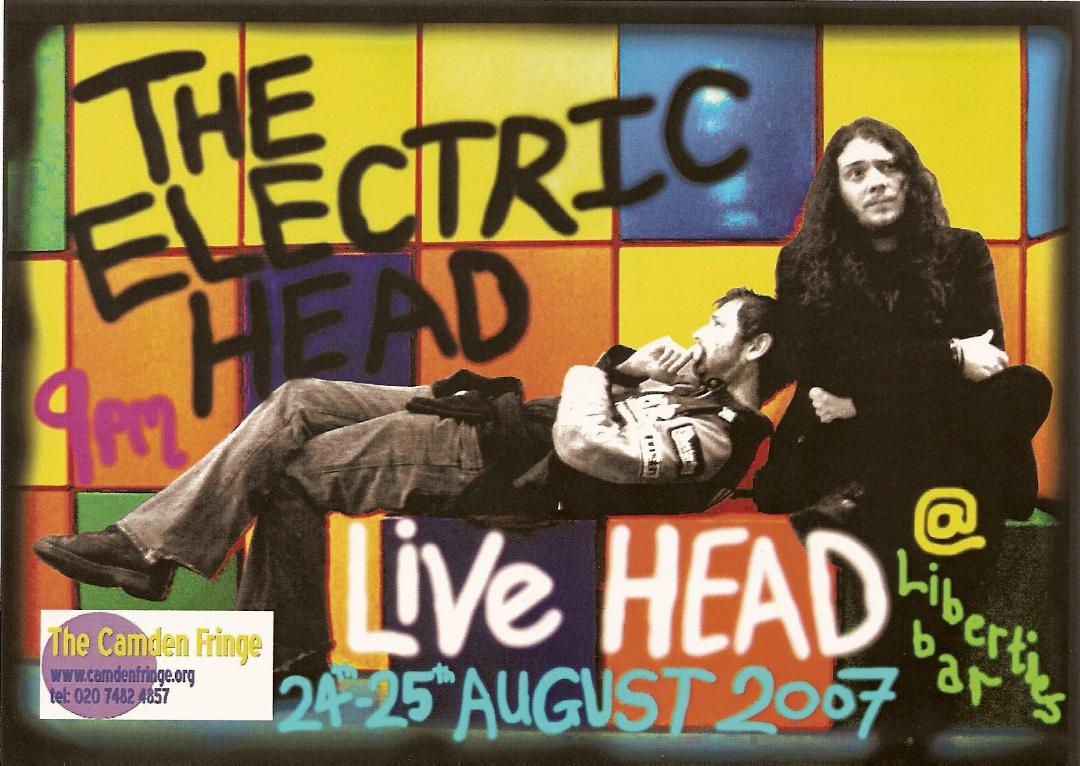 In Part Two of Cy Henty’s story I asked about his tour with Russell Brand, his run at The Pleasance Theatre and his character work in indie films.

Leslie: Can you tell us about what happened when ‘Sam and Cy’, your comedy double act with Sam Ball, got taken up by a London agent and ‘went big’?

Cy: We were fortunate enough, through this agent, to end up on The University Tour with Russell Brand. I remember him stripping off at one show and demanding a bottle of Jack Daniels from behind the bar – at another spraying the audience with a fire extinguisher and all of us getting escorted out by security. Sam and I had quite tightly scripted material but Russell had the audience sussed really – although by his own admission Russell was abusing a number of substances during this period in his life. I’m aware that some people find him offensive – but isn’t it just an absolute desire to be brutally honest? To have things out in the open? To throw off the disguise? I found him intensely charming, warm and very loyal to the other comics on the bill; he was acutely intelligent and had a great energy about him. He invited Sam and me to see his first solo show in Edinburgh after he had been through rehab and I’d never seen him so nervous. It was a great show – self analytical and self-deprecating. Russell essentially bares his soul on stage and encourages his audience to shed their masks along with him. I think he’s quite courageous and brave in a lot of respects.

At the same time Sam Ball and I had a run at The Canal Café Theatre where we began to develop our own Edinburgh Festival show.

Eventually we were given a slot at The Pleasance. For us, Edinburgh was an incredible experience – performing our show every day for a month meant that we knew the material inside out. In fact during one show where an audience member decided to walk out across the stage during our psychiatrist sketch we actually swapped roles and did the rest of the show as each other. The city is incredible during the Festival and I never wanted it to end. In my real life I was going through a difficult divorce and fighting for custody of my son; here, I was in my element mingling with performers and artists. I had one day off and my mum and dad brought my son to see me, and I remember heading off to the Castle with him on my shoulders carrying a sword filled with Smarties, battling our way through the crowds and street performers. We got some great reviews and everything was looking great for ‘Sam and Cy’ at that point. But even though our show had done well we still came out in debt and were unable to pay our agent. This led to a lot of disillusionment with the whole comedy industry, and the pressure of performing, working and family life meant that we just ran out of steam and were unable to build on our success by returning the following year, even though one of our biggest supporters, my son’s Uncle Dan, kindly paid off our debt to the agent.

Uncle Dan was a huge inspiration to me. He had his own art studio and had given up working as an engineer at Fords to become an artist, and recognising his talent I had roped him in as our photographer. He was a true bohemian, extremely eccentric and full of wild energy. On a night shortly after my son was born we went on a Neykia or ‘Night Sea Voyage’ from the town into the countryside, crossing the river of fire that was the motorway and stopping to talk with the Houyhnhnms in the moonlight; we faced our demons in the woods where he struck a skull-faced tree and we chanted and danced and howled into the night sky in an ancient, magical ceremony of our own to welcome and protect the new child who had entered the world. Dan always encouraged and supported my work as a visual artist, poet, writer and performer. I think he’s come along to see me perform more than anyone else and I painted a large portrait of him over a period of six months when I had become homeless and he took me in. He suffered with his mental health throughout his life, and the portrait was a collaboration between us with him telling me how he felt and me weaving his nausea and fear into the painting. He had some of my artwork framed and put it on his wall, and he spent time reading and discussing my creative writing. Usually over gin and tonic. He died very recently and I miss him more than I can say. It was a discussion with him and my son when we went on a camping trip to Norfolk that led me to write the short ‘Sam and Cy’ film ‘Tillington Hills.’ Apparently it’s a type of cider – but my son thought it sounded like the name of a Victorian explorer and the three of us went off on a journey imagining his adventures. The notes from that conversation were the bones of my eventual screenplay.

In fact this collaboration not only brought together both my double acts (Al Ronald from ‘The Electric Head’ pops up as The Wormit) but also ‘Sam and Cy’ director Paul Battin as the narrator. It also starred my school friend Suzy Bloom who has just been in The Mentor at the Vaudeville Theatre in London. Sam’s cousin Adam Samuel who teched for us in Edinburgh when he was just 15 filmed and edited it and also pops up as the butler!

Leslie: So what happened after the Edinburgh Festival?

Cy: I was lucky enough to be spotted at a gig in London by a film producer who got me my first role in a feature. It was definitely the biggest-budget film I’ve ever been in, and of course, because my life always seems to take on a surreal slant, I played a manic gameshow host in little more than a conch codpiece in a film about a giant boxing shrimp. I had a driver who picked me up and took me to the studio each day, where I was spray-tanned and put in gold lame hot-pants, a conch codpiece, gold cowboy boots and a laurel wreath. I then stood on a huge purpose-built arena before an audience of extras who were paid to laugh and applaud my every word, as I introduced a Giant Animatronic Shrimp. That one experience did teach me about continuity and the importance of keeping your performance consistent in each shot. The first time I stepped in front of the camera I gave it my all, waving my arms around manically and striding about. Then ‘Cut’ right, ‘go again’ ‘No, no stop! In the last take you went over there and waved your left arm, then your right and…’ I realised then that less is more in terms of gesture and that you had to remember your mark and keep to it. I also realised that film acting was a completely different process from being on the stage! Particularly in that you will have to do the same thing, in pretty much exactly the same way, over and over and over again. It was a steep but quick learning curve and a great experience.

Leslie: I take it that was how you got into horror films?

Cy: Yes. Soon afterwards I began my long collaboration with independent horror writer and director Pat Higgins. Pat had run a comedy club in Southend when Sam and I were on the circuit and we had played there a couple of times with great success. When Pat was making his first feature ‘Trashhouse‘ and was looking for someone last minute to play the mysterious ‘Agent Allen’, an actress and singer I know mentioned that I might be able to do it, and of course he remembered me. I think I had to learn my lines in an evening and be on set the next day. I loved it. The difference with low-budget and independent film making is that everyone has to pitch in, and Pat Higgins creates a friendly ‘family’ type environment on shoots with people painting scenery and mixing up fake blood whilst others pop out to get snacks and pick up last minute props. He’s an incredibly nice chap and that really helps. Over the years I have been in six of Pat’s features and one short. Weirdly the film ‘KillerKiller‘ was actually shot in the psychiatric institution where I had had my first job. The old red-brick Victorian asylum was now deserted and builders were beginning to gut its interior to make luxury flats, but some wards were still intact. It was strange being back there and walking down the echoing corridors. It certainly made a great location though, and Director of Photography Al Ronald made the most of it. In fact DOP Al Ronald and I would often chat on cigarette breaks. It turned out he wanted to go into comedy and we shared a love of The Bonzo Dog Doo-dah Band, Vivian Stanshall, Monty Python, Terry Gilliam… and so my second double act was born. Shortly afterwards we recorded our first series of podcasts… 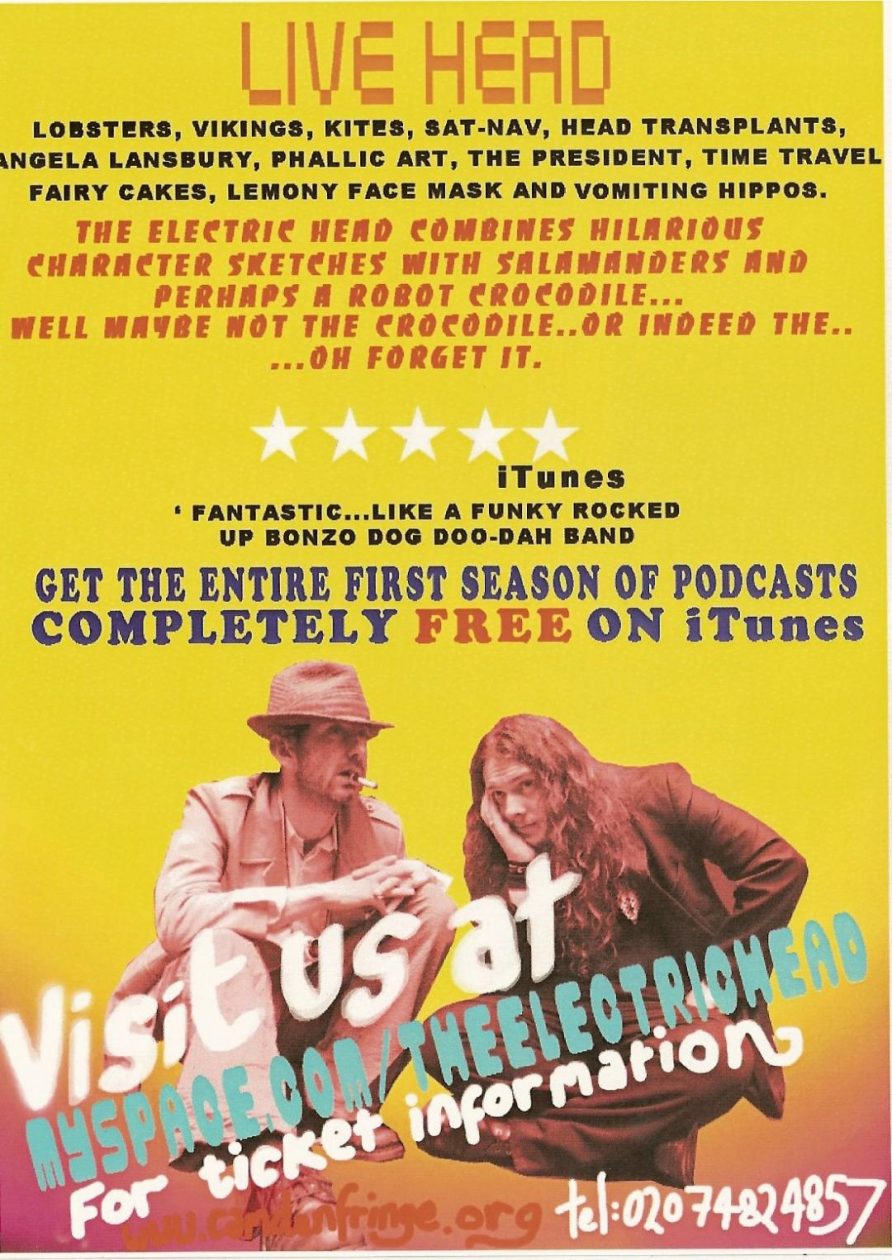 In Part Three of Cy Henty’s interview next week he talks about his BBC pilots, his podcasts and alternative films and the philosophy that sustains him.