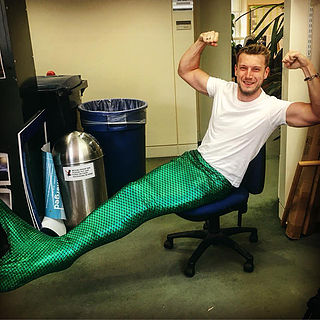 Sacha Coward talks about his work in museums, including building ‘escape rooms’ and running family festivals as well as staging interactive exhibitions, films and events. Through innovative programming, Sacha aims to showcase ‘hidden histories’ and reach out to underrepresented audiences.

He says: “I believe museums and heritage create powerful places for social change. As part of this I am one of the chairs for the Museum Pride LDN group of heritage professionals who march for London Pride each year. I also co-chair the QueeringMuseums network and am a yearly Fun Palace builder, working with heritage sites to provide space and opportunities for communities every October.”

I asked Sacha about all the ways he involves communities in making museums a more exciting and welcoming space for everyone.

Leslie: Could you describe a few of the most successful museum projects you’ve worked on, please.

Sacha: I have been lucky enough to work at the National Maritime Museum in London for the past four years whilst it has been undergoing a huge internal change. As well as opening four new galleries, one of the requirements attached to the Heritage Lottery Fund grant the Museum received was to change the museums ethos, its approach and its relationship with local communities.

Of all the projects I’ve been able to work on one of the most exciting was working with three community groups and the artist Eve Shepherd to produce three new permanent busts for one of the new galleries. More than this just being a fun and creative project it has also got to the very core of why I work at Museums; namely the chance at platforming diverse voices and showcasing underrepresented histories. The three groups we worked with were Action For Refugees in Lewisham, Girl Guiding and the transgender youth support charity Mermaids UK.

The resulting three artworks that have been created by Eve Shepherd in bronze resin are a beautiful testament to these three groups, everything about them was created in collaboration between the artist, the community group and the Museum. It makes me unbelievably proud to know that the voices and identities of young women, refugees and gender fluid youth are now out in the open in a national museum.

As well as this I am also immensely proud of working on LGBTQ+ representation within the Museum’s public programming helping to build a yearly LGBT History Month festival every February and creating queer inclusive events, workshops and activities for adults, schools and families.

Leslie: What does the idea of ‘escape rooms’ in museums mean?

Sacha: An escape room is really shorthand for a whole set of experiences. I often describe escape rooms as being a bit like videogames in real life, or if you’ve watched it, like the Crystal Maze! Traditionally they are a set of themed puzzles and challenges that you and a team must solve in a given time limit. The smallest are quite literally rooms with hidden keys, trapdoors and ciphers. The biggest are full-on movie sets with lasers, augmented reality and incredible special effects!

I love these experiences, I have always enjoyed experiences that blur reality with escapism and throw you headlong into a narrative. As a museum geek I could see that the application of these kinds of experiences in heritage is immense! I was also lucky enough to work on PunchDrunk‘s ‘Against Captains Orders‘ experience at The National Maritime Museum and experienced first-hand the sheer excitement and enthusiasm that it awakened in a stuffy old museum! 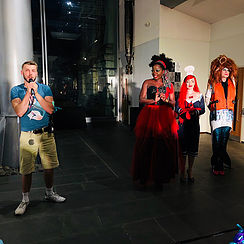 What I try and do is bring some of the mechanics and techniques in escape rooms and videogames into real life museum spaces. Depending on budget and the limitations of the space this can be as simple as an immersive treasure hunt all the way up to a full-scale immersive experiences with props and gadgets.

Leslie: How have you gone about creating inclusive events for museums? What have you learned from doing this?

Sacha: They may both seem a bit buzzwordy but the two principles I rely on most in creating welcoming and inclusive events are ‘co-creation’ and ‘intersectionality’.

Co-creation is the principle of building things together, it is not particularly unique and has been around since the dawn of time but museums seem to have only recently rediscovered it. The principle is if you build an event in collaboration with your target communities you will probably end up with a better event but also you will have a more committed and engaged audience for whatever you create. This can be as simple as hosting a conversation or brainstorm at the beginning to having a fully open collaborative process where communities are equal partners in building the event from scratch.

Another important factor is, when possible, to remember that identities do not exist in a vacuum. Whilst it is important to honour anniversaries and history months for all communities of identity there are many opportunities to cross programme-in diversity in all your events. A family workshop can still be delivered by an Iranian artist, a feminist poet might also want to be involved in your Christmas event and a drag performer could be a great compere for your next comedy night. Identities don’t sit in discreet boxes, by cross-pollinating the way you programme you will attract a much broader and less segregated audience.

Leslie: How have you tried to change the so-called ‘boring’ historical/academic aspects of museums into real, living experiences that connect with people and draw them in?

Sacha: For me Museums have the power to be incredible places that inspire and provoke. They house some of the most treasured, frightening and powerful objects you can imagine. But from my perspective they are just dead objects until you use stories to bring them to life. The more engaging these stories are, the more likely they will capture the imagination of the public. Through performance, games and art new audiences can connect with stories that are normally tucked away out of sight.

The Queen’s House is one such building; only two years into working there I found out the story of the ceiling of the Queen’s House. The ceiling was gifted by Queen Anne to her ‘favourite’ Sarah Churchill. These two women had an incredibly powerful and tumultuous relationship, one that was powerful enough to quite literally pull down a ceiling. The story has just been released as a film so I expect to hear much more talk about it, but at the moment there is no plaque or line of text that tells this story in the building. Therefore for LGBT History Month 2018 we created an event for the LGBTQ+ community called ‘Fierce Queens’ that took over the Queen’s House and used this story as a springboard for drag performances, song and comedy. The event sold out and introduced a huge new audience to their own tangible heritage.

Leslie: Can you describe your personal and work involvement in LGBTQ+ experience/communities, including the importance/history of mermaids as a myth, please?

Sacha: As a queer person working in heritage I have a platform, I feel that it therefore falls upon me to work hard at representing my community, particularly those voices in the community who are particularly underrepresented. This led to a relationship with Mermaids UK a transgender youth and family support network and charity. Through working with them I have met incredible families and kids who are dealing with a huge amount of pressure from all sides. These kids are some of the bravest and most emotionally intelligent people I have ever come across. Working with them has changed me, I now aim to be the best trans ally I can be.

Another surprise outcome has been a discovery of a fascination for mermaid folklore! Mermaids UK take their name from the mythical creature as it is a creature of transformation and mermaids are, so I have heard, very popular with many transgender and gender fluid youth. Connecting this symbol with my own museum experience I started to dig and found a huge amount of queer symbolism in mermaids. For example the original ‘The Little Mermaid‘ by Hans Christian Andersen was written after being rejected by a same-sex lover. The Disney film was in turn partially adapted by a gay man who died of Aids shortly after the film became a hit. The layers of this story just keep coming, I find mermaids a wonderful symbol of queer empowerment also they are an icon that links all elements of the LGBTQ+ spectrum!

Next week I interview novelist Ali Bacon about writing ‘creative history’ and her use of a male protagonist when writing for a women’s press.

PrevPreviousTRANSFORMING SCIENCE INTO ARTBOOKS
NextWHAT’S THE TRUTH BEHIND HISTORICAL FICTION?Next
On Key