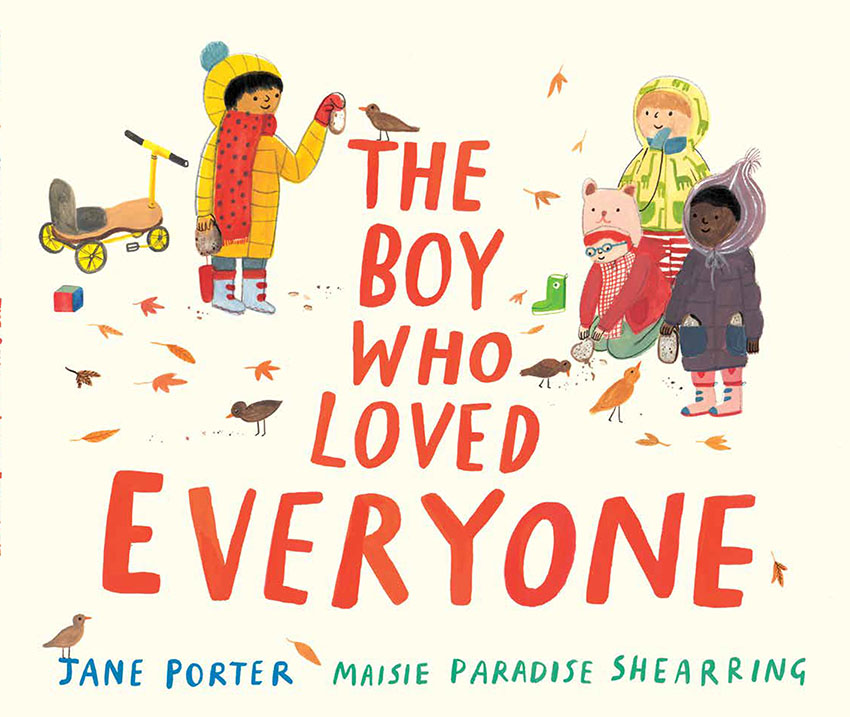 I talked to Jane Porter, illustrator, author and conservationist about her children’s books, her love of nature and her creative process. Her books include Brian The Brave (written by Paul Stewart), King Otter, Simon & Schuster, June 2019 and The Boy Who Loved Everyone (illustrated by Maisie Paradise Shearring, Walker Books, November 2019).

Jane says about herself: “I am currently working on a four-part graphic novel: The Ghost Carp. It’s a humorous re-telling of Herman Melville’s 1851 masterpiece Moby Dick, set on a 21st century urban river.”

Leslie: Can you tell the story of how your interest in writing and illustrating children’s books began, grew and developed?

Jane: It began in my childhood – I loved books and stories and was always reading and drawing. My favourite book was from the Czech Republic (Czechoslovakia at the time) and it was called Modern Tales and Fables, illustrated by Vaclav Sivko. It had a glorious colour wheel but no writing on the cover, so it looked magical, and the stories in it were very surreal – things like a singing dead light bulb, or a boy who planted his grandfather and grew a tree of new grandpas. And it had a fold-out page of a hippo who grew a neck like a giraffe! I think this book was a big influence on me. It was published in 1969 and has a pretty psychedelic feel.

Despite all this I never considered a career as a children’s author and illustrator but spent many years editing magazines about landscape architecture and garden design. It was only years later when I started a part-time Foundation course in Art and Design that a tutor suggested I went into illustration.

Leslie: Can you give examples from your published books of the underlying themes they deal with?

Jane: Nature, being yourself, openness – and in particular an awareness of the beauty of everyday, ordinary things. My new book (out this month, written by me and illustrated by Maisie Paradise Shearring) is called The Boy Who Loved Everyone, and it’s inspired by a real boy at the nursery I visit once a week. The children I see there are the source of many of my stories one way or another – I love to observe how they interact and what they feel strongly about… I’m currently writing a new story about the way that children notice tiny little things that adults pass by.

Leslie: What is your creative process, working as an illustrator? Do you trust to instinct, apply techniques you’ve learned, constantly rework, reuse your own or other people’s ideas?

Jane: Probably all of the above! Definitely instinct is important – but so is the hard work of researching the subject and filling sketchbooks with ideas and notes. I do rework and sometimes will draw something multiple times to choose the best version to use. I’m always looking out for new techniques to try and last year went on an excellent course about colour which has opened up a whole new world.

For my book Pink Lion, I tried every material under the sun to get the right pink, but only found the one I wanted after I read a book about Picasso and spotted that he often used household emulsion to paint with. That sent me off to Homebase and it was a Dulux tester pot (Berry Smoothie) that became Pink Lion’s fur coat.

Another thing that gets me constantly experimenting is my teaching – I teach illustration at Putney School of Art for three sessions a week and find it very enjoyable and stimulating. Not only are the students full of interesting ideas, but I have to experiment with new things to demonstrate to them that I might not otherwise have tried.

Leslie: How do you get yourself in the zone for creative work?

Jane: My favourite way to start the day is a bike ride – I’m lucky to live near enough to Richmond Park to cycle round there first thing in the morning once or twice a week. I really enjoy noticing the tiny details of seasonal change, and even quite like it when it rains. The exercise and fresh air set me up for productive, creative day.

Leslie: What was your childhood experience of making trails and guides? Can you describe the museum trails you make – the different approaches and how you put them together.

Jane: As a child – and teenager – I used to love making booklets, magazines and comics, and I even made a guide to our (very small) garden. I was definitely sowing the seeds for my future career there if only I had known!

I love making museum guides now and will always start with a visit to the museum/palace/garden in question. Sometimes I’m given a detailed brief, which is good, but I particularly like it when I get to wander around with a sketchbook and decide what are the most appealing things to feature. I like to create my own fonts for the text and put together a whole package with plenty of opportunity for families to engage with the collections and be creative together.

Leslie: What do you do as a river conservation volunteer?

Jane: I’ve been volunteering for the last 15 years with the Wandle Trust. Once a month we get into the water in waders, and heave out the rubbish – anything from tiny scraps of plastic to mattresses, motorbikes and even kitchen sinks. It’s heavy work but I really enjoy it, and there’s a great sense of camaraderie amongst the volunteers. It’s also satisfying to look at the great pile of rubbish at the end of the session and think about how much the river environment has been improved.

We also tackle invasive species such as floating pennywort, which can form a thick mat from one side of the river to the other in just a few weeks.

Leslie: How does your river conservation work relate to your animal stories and your graphic novel?

Jane: There’s definitely a watery thread in my children’s books, particularly in King Otter. In this story, an otter finds a box of fancy clothes and declares himself king. His demands get increasingly outrageous until he falls in the mud by the riverbank, and rediscovers the restorative powers of river swimming. This is something I really believe in! In summer I often go for a river swim – though I have not swum in the Wandle. But I often find myself standing in the water, gazing in wonder at damselflies fluttering in the sun or the tiny stars of water crowfoot flowers waving in the stream. So there is definitely an underlying message about river conservation in King Otter.

In the stories I’ve illustrated written by Paul Stewart (Wings! and Brian The Brave) I had a lot of fun adding many tiny details inspired by wildlife – grey wagtails, curlews and lapwings are all in there.

Leslie: Given the ecocidal history of whaling, why did you choose Moby Dick to illustrate as graphic novel?

Jane: That’s a good question! I was keen to do a graphic novel inspired by my experiences cleaning the river Wandle. I’d been drawing characters in waders in the river, but was lacking a story. Then at one clean up I was chatting to the event organiser Polly, and she mentioned the ghost carp – a large white carp that’s often been seen in the river. She said that she’d been in the water and it had pushed against her – and all of a sudden I thought of the white whale in Moby Dick and began to wonder what might happen if I borrowed elements of the classic novel for my story.

Having read Moby Dick twice, I would say it is the opposite of an endorsement of the whaling industry – it is full of horrifying descriptions of slaughter and portrays whales as magnificent and intelligent creatures. In my story The Ghost Carp, the three main characters are not whalers or even anglers, but river conservationists engaged in restoring the river to ecological good health. It’s only when Abe (the Captain Ahab character) loses his dog to the ghost carp that he sets out for revenge.

Leslie: Who or what inspires you – why them?

Jane: In children’s books I’m inspired by so many people, but if I had to pick one I would say Viviane Schwarz. In my opinion she is the most inventive, creative and original author and illustrator in children’s books today.

I like music a lot and I would say Patti Smith is a big hero – she is so completely, authentically herself. Strong, creative, uncompromising but also compassionate and with a great sense of humour. And I have been a huge fan of Edwyn Collins since his Orange Juice days. He was a pin-up for me in the 80s but has continued to be an inspiration, particularly in making a remarkable recovery after a massive stroke. He’s returned to making music and touring with all his creativity and sense of humour intact. He’s also an illustrator – a friend found a shirt printed with his bird illustrations for me in a charity shop and I am wearing it now!

Next week I interview Sussi Louise Smith who describes herself as, ‘A Danish artist & poet living in Ilkley, UK, painting life in colourful naivism’.