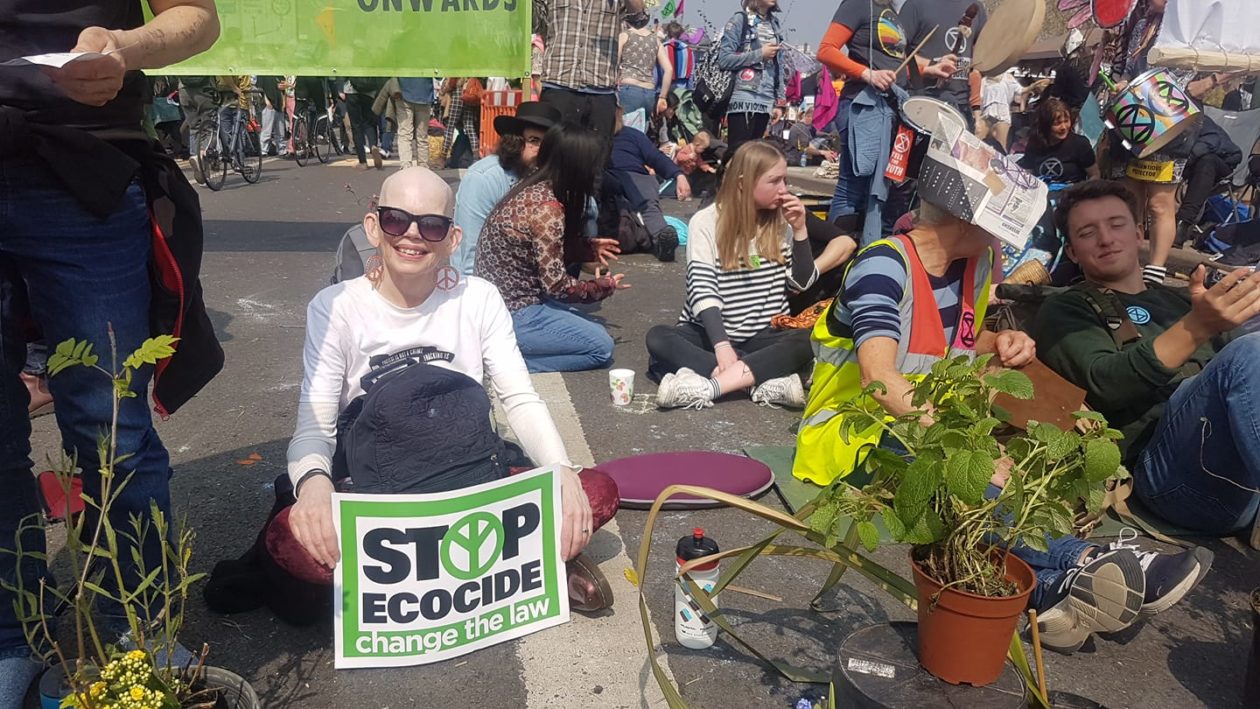 IS ‘INTACT’ SUE HAMPTON’S LAST BOOK & IS IT A MEMOIR?

I interviewed Sue Hampton, author of 37 books for all ages, ambassador for Alopecia UK and climate activist about her latest novel Intact . I wanted to know how far my wife’s novel draws on real-life experience.

In Sue’s words, “Intact is the story of Mags, whose husband leaves her as she is about to turn sixty… As her life restructures itself again she remembers the foster child, Georgie, who loved her but was rejected by her father because he wasn’t a ‘proper boy’. Perhaps she can find him again, and recover the person she was meant to be.”

Leslie: Intact, is about a woman, approximately your age, who begins a relationship with a non-binary, cross-dressing man, so how autobiographical is it?

Sue: I wouldn’t have written it if I wasn’t with you, Leslie. I would have felt ill-equipped. But you aren’t Georgie; in fact you are two very different humans, just as I am in many ways unlike Mags. She’s (even) more eccentric and impulsive than me, and a great deal more direct and earthy. Although Georgie shares your sensitivity and depth, he lacks your openness, sociability and strength. Therefore the relationship they have is almost nothing like ours – except that like them we have been in the Rothko room at Tate Modern a fair few memorable times. Like Georgie, we have both taken part in Stop the Arms Fair. We are both climate activists, but in the novel Georgie is a step ahead of Mags, whose personal crises dominate.

Leslie: The past plays an active part in the present in Intact. In recreating childhood scenes, how much did you draw on your own history?

Sue: The social contexts of my own experience are authentic, of course, because I too was a child in the Sixties. I model the seaside on Frinton, but really it could be any rather bleak British beach. I used to help Mum free the peas from their pods like Mags and although I never had a tree house (and would have been too scared to climb up to it) I was highly imaginative and spent a great deal of time in my own created worlds. There are striking contrasts, though, because I adored my father. So Daddy, aka Mr Mean, is sheer fiction. As a child Mags is feisty. I was quietly compliant – but with a strong sense of justice and nothing to rebel against. In my reading, though, I admired characters who did. 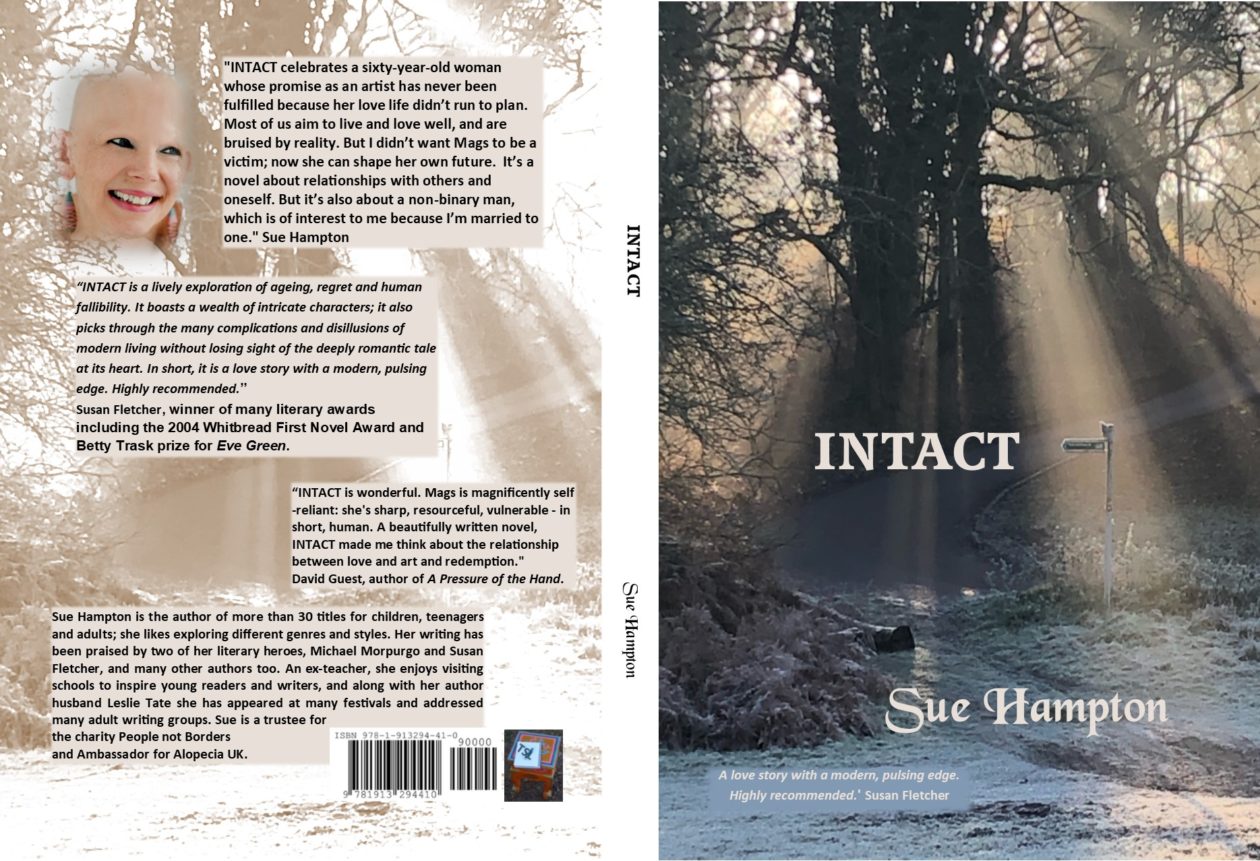 Leslie: Can you explain the title ‘Intact‘?

Sue: When Mags and Georgie meet again after more than half a century, they both wonder whether their connection as young children can possibly have remained intact. The novel explores the power of the past – which oddly, becomes more vivid and important as we grow old and wish we could go back to the garden where we grew up and find the house just as we left it. But of course more urgently than that, we long to recover who we were and those we loved but have lost. I know that my love for my father, intense in childhood, has since his death remained intact, unmuted, a fundamental part of me. So I believe that strong feelings can endure through all kinds of changes, if they are key to whoever we are and will, regardless of time and circumstances, remain. Mags has had a complicated and challenging life, and Georgie’s traumas have made him vulnerable, but there’s a sense in which all this living has left their core selves intact, which makes it possible for them to renew the bond they shared.

Leslie: Why did you set Intact in the autumn and winter of 2018?

Sue: I was writing it from early 2017, and setting it in real time, but I wanted it to be more current than that and to update it by including the changes in the world as the climate movement emerged, with Greta and XR and that IPCC report that gave us eleven years to turn things round. But I have already written a novel about rebels and the rebellion – available as an e-book – so I didn’t want to re-tread the same paths. So I settled for a context in which certain characters are waking up to the crisis in a world that largely still sleeps.

Leslie: Will Intact be your last book?

Sue: By the time I’d finished it, that was the intention – partly because I consider it my best work. Partly because of circumstances beyond my control which make adding titles to my collection a little pointless when it’s harder and harder to sell them with fewer school bookings and other events. And partly because the climate crisis calls me to be as active an activist as I can be, in the short time that remains for the planet and for me as a less-than-robust older woman. That compulsion is as strong as ever but lockdown has kept me at home with a desire to spend this unexpected time creatively. And Intact could be said to cry out for a sequel. So I have begun one, although part of me hopes I never have enough time finish it.

Next week I interview illustrator James Mayhew who paints to music in concert halls and creates books introducing                  children to great art.