Books come out of mindsets. In the case of my new novel, Love’s Register, I grew up as an author while writing it.

When I started, I believed I was producing something spectacular that would make my name and stand the test of time. Now, after 14 years of revision and republishing, I realise that achieving either is beside the point. A book follows its own logic; the writer’s task is to see it through.

I was fortunate to be published by small presses. It allowed me to find my feet as a writer, and at first the book grew as three separate novels. It also meant I escaped the standard big-five ‘heavy edit’. But by the final version, I’d recast everything while adding new characters and storylines.

My original mindset 14 years ago was youthfully naïve. I believed that the literary coaching industry had neutered our writing, focusing on crime, the teen-talk book, historical commentaries or the stripped-down dirty realist story. By way of contrast, my ’60s book, Aphrodite’s Children, was going to use complex, lyrical language in order to dramatize the hidden psychology of the era. I imagined I was saying, “Yah boo sucks to fashion and genre.”

But I was also over-cautious, inserting repeat phrases and labouring time/place shifts, covering the jumps with too many connecting phrases. Later, with more confidence, I learned to cut from scene to scene and take out all redundancies. The rule is: say it once then move on. And when the story fires up, it’s better to burn up than fade away. Too much signposting what’s happening and keeping the reader onside doesn’t work.

My next step was Frontliners, a story about open relationships and left-wing politics in the ’80s/90s. This was written by my ‘teenage’ self, so it was overloaded with mirror-gazing and needed more character in action

I was lucky enough to be able to rewrite both books – republished as Purple and Blue – adding in links between characters and stylistic experiments. When I finally wrote Violet, the third in the trilogy, my mindset had become ‘adult’ and closed off, i.e. I believed my task was done.

I’d made myself into one of those grownups who say “I don’t do that” or ‘That’s not for me.” I was climbing into a space of my own and drawing up the ladder behind me. But really, I was blocking. When I looked again, I was shocked at how much cutting and reshaping my novels needed. There was plenty to fix, lots to expand on.

The child got the better of me and I started rewriting again. I had to dig deep and question every word but in the end I was lucky enough to find a publisher, TSLBooks, willing to go for it. So I had my third and final shot at writing the big novel that says something about who we are. It came out at 226,000 words with cross-referenced backstories, several protagonists and sections spanning four generations. It also examined creativity, resistance, psychological learning and how we tell the stories that direct us.

Perhaps all novel writing is a coming-of-age story. It’s certainly a trial and error thing. In the process of writing and promoting our work we may find ourselves in a room on our own or bigging ourselves up in a bargain basement.  Some authors learn the ‘rules’, others go it alone, many give up. If the main myth of our times is the rise and fall of the wunderkind, then we’re all individualists on mission impossible.  For me, to record that journey may be risky and the mindset complex but what counts is the person we become – and the qualities that brings to a book.                                                      Leslie Tate 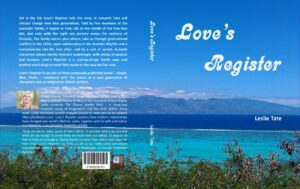 This piece originally appeared on Linda’s Book Bag as a guest blog on Sept 30th 2020. You can read that version here.