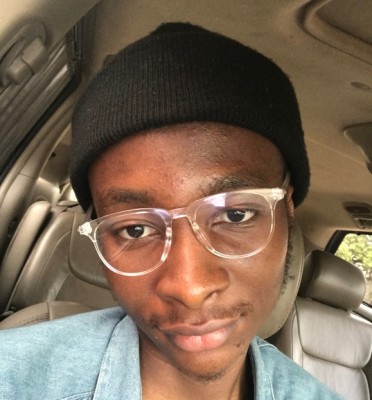 I interviewed Nigerian poet  Samuel A. Adeyemi, who is a poetry editor at Afro Literary Magazine and the winner of The Yellow House Library Prize for Creativity and the Teex Prize for Performance 2021. His poems have appeared in Palette Poetry, Frontier Poetry, 580 Split, Afapinen, The Maine Review, Blue Marble Review, Brittle Paper, Jalada, and elsewhere. Samuel’s collection Heaven Is A Metaphor is published by Praxis Magazine.

Leslie: How would you describe your poetic voice? What’s unique about it and how has it changed since you began writing?

Samuel: I’m not very observant about it, but I think my voice is fluid and modern. I reckon my poetry reaches for depth but doesn’t abandon easily accessible language. This has changed because when I began, I used to write like the classical poets. This was because those were the only poets I knew then. But when I began to read widely, my writing inevitably grew to use language more flexibly.

Leslie: What are the main themes of your poetry? Why them?

Samuel: Loss, faith, grief, family, and mental health are the main themes of my poetry. I think they reoccur because my writing is very personal, so it tends to reflect themes like these which are internal and concern the self.

Leslie: Which short poem best illustrates your mature style? What, if anything, would you like to say about the poem to help the reader appreciate its context and the full range of its concerns?

Samuel: I think this poem of mine is easy to grasp. It’s basically about me eavesdropping on my mother, lol. I do not wish to talk about the reason for the sadness.

Perhaps grace is a tangible thing / only to the one who watches another bleed. —Pamilerin Jacob

I watch her weep regret on the kitchen tile, her
tears dropping like a sequence of loose beads.
She ricochets between two tongues, cursing &
supplicating—she rebukes the devil in English,
begs the Lord in Yoruba; a kind of balance, I’d
presume. On days like this, I swear hope is just
torture euphemised, softened to keep the body
from crumbling. But what really do I know?
Stupid boy. Stupid, passive boy. I cannot trim
off the sadness threading my mother’s eyes.

Leslie: Tell us about the connection between where you live, your upbringing, and your poetry.

Samuel: I was born in Abuja, Nigeria, and I live here. It was a closeted experience growing up. I spent most of my time indoors, sheltered from the outside world. I guess it affects my poetry in a way. Growing up like that made me no stranger to solitude. I was used to introversion and thinking introspectively, and it is evident in my writing. As earlier mentioned, most of my poems are about the self. I don’t often look outward as much as I do inward. Also, due to the state of the country, protest poems have become inevitable for me. That’s probably one of the few times my writing reaches to the exterior.

Leslie: How does a poem develop for you? Do you put yourself into a ‘helpful’ mindset, watch for a good theme, blank your mind, or use some other strategy to get the best out of your writing?

Samuel: Interesting. I seldom reflect on my writing process. I think most of my poems happen in two ways. The first is accidental. Say, I’m watching a movie and thinking about a particular scene or dialogue. My introspection then generates a random thought which sounds, to me, poetic enough to be a line in a piece. So I write it down in my notepad before I forget, and later, I build on it into a poem. It happens when I’m listening to music as well. Even misheard lyrics often lead to poetry material, weirdly. The second way is more deliberate. I have to be intentional about it before anything happens. I select a theme and I write my thoughts about it. It doesn’t have to always be cohesive all through. That’s where editing comes in later.

Leslie: As a poetry editor of Afro Literary Magazine, what do you see as the developing strengths of contemporary African writing?

Samuel: I see contemporary African writing being daring, trying to break boundaries and prove wrong the stereotypes that surround it. It’s beautiful to watch. You can’t put it in a box and say this is what all of African writing is. It’s more nuanced, diverse, creative than that.

Samuel: The rationale behind my writing, like most writers, has always been to express. That is the fundamental reason I began writing—to let out my thoughts on the page. Up till now, that reason still fuels the craft, but I have acquired other reasons as well. For example, how much can be done with words and the general aesthetics of language is enough to make me want to write, whether I have something important to express or not.

Next week I I interview Rachel Godfrey who guides adults in the theraputic uses of creative writing, is the author of several books for English-language learners, and is a poet.