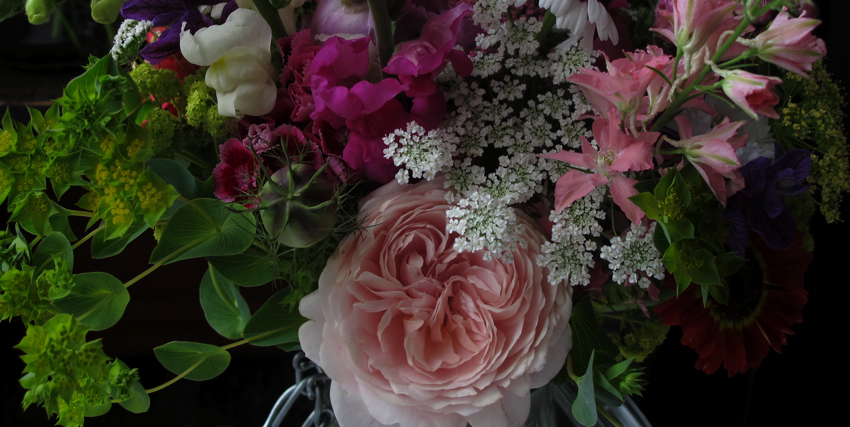 THE ART OF GROWING FLOWERS – IT’S A BUSINESS!

‘This way of working isn’t a reaction, it’s a proactive experiment, an open-ended open-hearted manifestation of a powerful inner impulse’. 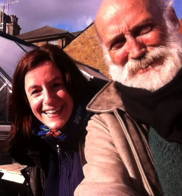 I interviewed Trevor Davies about the art and business of growing flowers. Trevor and his wife Bettina run Gillyflower, an ecologically-minded floristry business in Berkhamsted, Hertfordshire. Single-handedly, they cultivate a cut flower garden creating beautiful bouquets for local event as an alternative to imported flowers grown with artificial fertilizers and pesticides. They both have long histories of involvement in the performing arts.

Leslie: In a nutshell, what is Gillyflower of Berkhamsted? What’s unusual about the business?

Trevor: I suppose who is Gillyflower is the first part of the answer…    My wife Bettina trained at the Laban Centre as a choreographer and dancer and was co-founder of Protein Dance, an innovative contemporary dance company based in London and still performing in the UK and internationally. She has worked extensively in community dance and state schools and in the professional theatre as a movement director. She decided to make a change around the time we met. I studied music in Canada as a young man and gravitated toward theatre work, first as a musician and, after further training, as an actor. As a result of an injury in a show, I studied the Alexander Technique, and eventually trained as an Alexander teacher.

Bettina and I met as colleagues in a theatre company. Gillyflower grew out of our little garden in the centre of Berkhamsted. First we expanded to an allotment, then to an attempt to start a community growing project in collaboration with Transition Town Berkhamsted and The Sunnyside Trust. That failed to take root, and we moved on to the idea of a market garden supplying local organic food to the local community.

Leslie: What were the main difficulties you faced in setting up the business?

Trevor: We began to look for a plot that we could cultivate, which proved fruitless – we were chased by corgis and accused by the manager of a local motel of “looking at their land”! We also participated in various explorations of the ‘local organic food’ possibilities and realised that with our resources we couldn’t compete with Waitrose and Tesco and survive. It also became clear that many people support ideas as ideas but, for all manner of reasons, can’t translate that into action when the idea threatens to be realised. Bettina meanwhile had completed a horticulture course and attended a number of workshops and seminars around the country, and we decided to explore the possibility of a floristry project, providing a complete service from seed to bouquet. At that point we met a landowner with a mixed woodland/paddock/coppice estate nearby, and found ourselves doing what we’re doing now!

Leslie: What have you learned about growing, cutting and preparing flower arrangements? 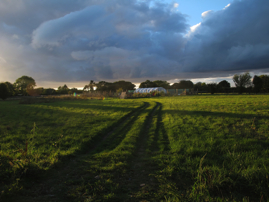 Trevor: As a team Bettina and I have enjoyed a Himalayan learning curve over the last two years. Bettina’s training in horticulture gave us a platform for the growing operation, which at present consists of a 25M x 25M deer-fenced garden nearby, enclosing 24 open-air raised beds and 3 more beds inside a 16’x 36′ polytunnel. Our self-imposed agenda has made the project work quite intensive. It arose from our desire to explore a more sustainable life. So we grow seasonal flowers organically and sell them only within a 10 mile radius. Apart from paying for the installation of the deer fence by a local farmer with a machine, all the work has been done by us and by hand – digging beds, building raised beds and the polytunnel, planting, 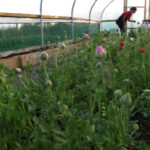 nurturing, harvesting, arranging, and marketing.  We’re deeply indebted to local individuals and businesses that have become our active supporters.

We are not an alternative business. This way of working isn’t a reaction, it’s a proactive experiment, an open-ended open-hearted manifestation of a powerful inner impulse. We aren’t competing with the supermarkets or the local florist. We can’t. But there are people who have a sense of the value of what we’re doing, and they love the beauty that we’re cultivating, and they participate by buying, selling, subscribing, visiting the field. I wouldn’t call them a community, but they’re the manifestation of community in a culture which doesn’t always commune very generously.

Leslie: How do you make original artistic and expressive statements with flowers?

As I said, we’re not an alternative. We’re working very steadily, inwardly and outwardly, not to live in reaction to others, but to find some authenticity in our own livelihood. Metaphorically I could say we’re giving up being critics in order to become more creative. Bettina’s background in movement and dance expresses itself in every bouquet and posy we sell. There is a significant international movement toward our kind of business and we’re in contact with many fine people who give their lives to flowers, and I’d still say that I haven’t seen work like Bettina’s anywhere else. My contribution, so far, has been more in the heavy labour than the finesse! Because we manage the rough field in which our garden is located, I’ve taken up scything, 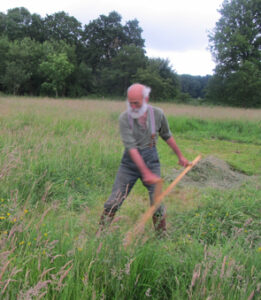 and that’s been a wonderful linking up of my Alexander work with an old and vital tradition of rhythmic movement in a natural system. I’m also developing some building and carpentry skills which is a great satisfaction and revelation to me. Bettina’s very skilled in the basic mechanics of floristry, although we’ve had to adapt many times in trying to avoid the use of the standard synthetic materials in our products.  We’re not puritans, by the way! We’re just trying to be very clear about where we draw lines for ourselves. Compromise is one of the basic conditions of our tenure on the planet…

Leslie: How has running a flower business modified your relationship to the natural world?

‘Let me count the ways…’ Actually, in one way only – Nature has taken charge of a much larger part of us. Things that were ideas have become lived, embodied realities. When we’re working the garden, we’re surrounded by birds, flowers, mammals, the great indifferent intelligence of weather, the felt rhythm of the seasons. I’d say that in observing these ‘outward’ events, I see them as much inwardly as outwardly. All my component parts are earth, and I’m an Earthling. The seasons, the weather, the other creatures – all of the natural manifest world has a correspondent existence within me.

Leslie: How has Gillyflower of Berkhamsted changed you?

Trevor: Nothing happens in isolation, and I can’t say exactly what the root cause of the changes is. Gillyflower has happened at a point of confluence in my life. All 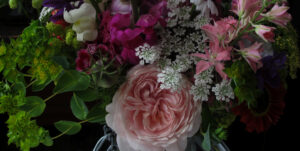 through my life I seem to have written songs and prose about Nature and gardens. Now a large part of my time is spent in a garden, where old assumptions have proved false, things I’ve struggled with for decades have become friends, friends have fallen away, and the world with all of its cruelty and sorrow has become more dear. If that process needs a name, ‘Gillyflower’ will do.

PrevPreviousTHE CREATIVE SPARK – what do people find to do with their talents?
NextTHE PAST IS ANOTHER COUNTRYNext
On Key