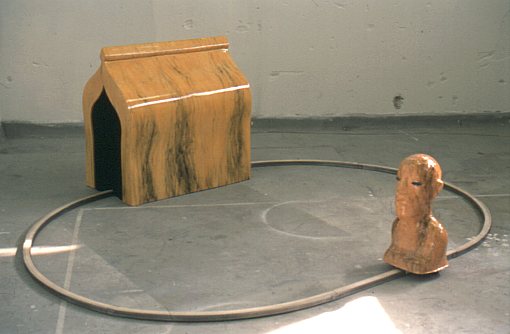 The ego endeavours in all kinds of ways to defend itself against the objective unpleasure and dangers which menace it – Anna Freud.

My childhood was characterised by solitary play. At an early stage, I crouched by the house with a stick and scraped out the mortar between bricks. Using my thumbs, I filled the holes with a sand-and-water paste. It was my idea of a physical experiment. I’d understood the need for secrecy so I did it on the quiet, when my parents weren’t looking. Later I imagined tunnelling out from my bedroom to explore the street as an undercover agent.

Most of my play was like this – quietly subjective, slotting into gaps where people wouldn’t see me. So on rainy days the garden shed was my lab, full of paint pots and hoses and strange-shaped implements. It was dark and dusty like a bunker. In there I plotted to take over the world.

Steps behind the shed led up to an overgrown bank. This was my route around to the lawn, squeezing between the fir tree and the shed. I called it my North West Passage. Closing my eyes, I pushed between the wall and the pine needles. I didn’t want to see the ghosts hiding in the branches.

I returned to that shed, writing it into my novel Purple, but describing its interior through the eyes of Mary, my secondary narrator: ‘It was brick-built and square with high-up window-slits, gaps around the doorframe and a hole in the roof. The walls were cobwebbed, plastered one end, and hung with tools on nails. At the back was an old bath full of sea coal. We sat at the front on a large wooden trunk. Beside us there was a box full of kindling and chopped-up logs. The air smelled damp.’

My time playing in that shed gave me what Anna Freud called ‘an agreeable fantasy of controlling the world’. In her terms, my ego was using denial to defend itself from vulnerability. It was my safe place, or to put it another way: I was making up a Peter Pan story in which I outflew or outfought all the dangers.

In fact most of the dramas were small-scale,  but magnified by imagination and seen from more than one angle. So I saw maps in the path and seas in the borders. I looked down on ant lines and beetles and woodlice in corners. But my interest changed to fear when I saw the garden spiders. And after rain I was terrified when the worms came out like an invading army.

Indoors was safer. The games in the house were mental and rule-bound. They included board games and cards where I played both sides, retaking dice throws or pretending I didn’t know what cards each player held. In these games, I switched roles, blanking what I knew and changing who I was – it was my own private theatre. Similarly, I’d ‘switch’ in the mirror, pulling faces and speaking in voices. Or I’d repeat under my breath ‘They seek him here, they seek him there’, as if I was the Scarlet Pimpernel. 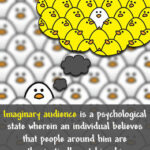 The way I played these games gave me a feeling of being special or unique. I was appearing as the hero in what David Elkind’s calls the ‘personal fable’. My story was all about me, written on the wall in invisible ink. And my imaginary audience were inside me, watching.

When I was in company, I kept my magic thinking hidden. The boy in the mirror was a very different person from the shy conformist at school. In any case, I wanted to keep myself to myself.  There was a secret satisfaction in being so far crazy that no one could read me. But sometimes the ‘mad kid’ broke out. So at parties I’d go wild, running around shouting and bouncing on beds. And on Christmas Night I hardly slept, appearing very early in the morning white and shaking with anticipation, as if I’d caught a cold.

Solitary play was an escape. It kept me safe, inside myself, but it also cut me off. It was probably so intense because I was an only child. But I think it’s still there. So when I dream of fame or argue in advance with someone in my mind or picture what I’d do if I ran the country then I know it’s my personal fable. Of course now, as an adult, I see it as a habit we all share. It’s not so secret and because you’ve read this blog, the imaginary audience is you.