Caroline Hagood – poetry as a walk on the wild side

When I interviewed New York poet Caroline Hagood I asked her some very direct questions . Caroline’s answers were even more direct – full of wit, invention and surprises. As a teacher at Fordham University, Caroline has edited a multi-media graduate magazine, writes for The Guardian and Huffington Post and has two published volumes of poetry, Lunatic Speaks and Making Maxine’s Baby. In the words of Joan Larkin, Caroline’s poetry is about ‘the loneliness, wild creativity and valor of survival’.

Leslie: If you had to give a Ted Talk describing your writing to an unfamiliar audience, what would you say about it? 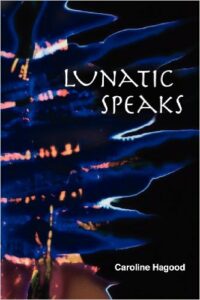 Caroline: I guess I aim to say the thing we’re all thinking but are usually too afraid or embarrassed to express. I try to bring together the poetic and anti-poetic. I like to record the beautiful, the ugly, and more often than not the hilarious or strange. I like to disturb myself as I write. I have no idea why I do this. I think I’m a pretty normal person in ‘real life’, and maybe this is part of it. Writing is my place to get really, really weird, to let it all hang out.

Leslie: You seem to adopt the voice of an obsessive in much of your prose and poetry, why do you do that?

Caroline: Part of it is that I think all writers are obsessives to some degree. I think being a writer requires an intense focus on details that other people might consider to be peripheral. I also have to confess that the way I approach my writing is quite obsessive. Writing is my obsession. It’s everything to me.

Leslie: Do you use masks in your writing? If so, who/what are they, and how do they help/hinder you as a person and as a writer?

Caroline I absolutely do. This is how my ‘I’ poetry turned into fiction. My next project is a novel that I recently completed. 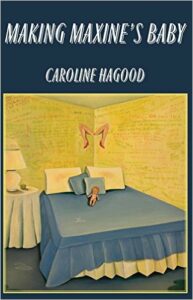 This mask-wearing is also why my last poetry collection featured a character who was homeless and very much not me, even when I used the ‘I’. And, as you already noted, I tend to assume the mask of the unhinged or  unbalanced person, partly because I understand it and partly because I don’t. This particular mask helps me convey the really intense moments in life in my writing somehow.

Leslie: What are your obsessions? How have your real-life obsessions contributed to your writing and how have the obsessions that have appeared imaginatively on the page affected your life?

Caroline: I’m obsessed with the usual things—books, film, food, writing, and the few people I truly adore. But I think my other harder to describe obsession is the stuff of life that isn’t treated as high art or worthy of recording. My obsessions that appear imaginatively on the page not only have an effect on my life, they haunt it. I walk around with all the nutty characters I’ve created chattering in my head. It keeps everything interesting.

Leslie: You seem to be searching for the ‘great one-liner’ in your writing. How do you go about finding those phrases?

Caroline: I am. I grew up with a father who worshiped at the altar of W.C. Fields, so the one-liner is key. I kind of collect people’s phrases as I go about my day by either writing them down or storing them in the old obsessive, musty, unhinged depository of my mind.

Leslie: How do you write your most challenging work, from beginning to end?

Caroline. That’s most likely my problem. I write in pieces and then assemble puzzle-style. My writing process is more like frenetic quilting. I doubt my editors appreciate this.

Leslie: Who are the writers/artists who have influenced you the most? What have you gained from reading/hearing/seeing them?

Caroline: From the old days, Virginia Woolf, James Joyce, and Vladimir Nabokov, and most recently I’m pretty into Maggie Nelson. From Woolf, Joyce, and Nabokov, I learned that all the best fiction sounds eerily similar to poetry (to me at least), and this got me thinking about genre—what it is and how to bend it. Along these same genre-bending lines, Nelson’s book Bluets changed my conception of what a book could be and could do. It’s stunning in both form and content. Go out and get it immediately.

My latest poetry collection, Making Maxine’s Baby, is the work I’m happiest with right now. I probably think that because it’s my latest, and the more time passes, the more time I have to start critiquing myself; but it’s too late; I’ve already unleashed it on the unsuspecting world.

Caroline: Because otherwise I would explode.

My thoughts are the things dogs dream about
when they whimper in their sleep.

Even my diary is scared of me, irked by my compulsion
to empty this warped head on paper, capture its rebels

in the jaws of endless yawning parentheses, tell the story
of how I became strange: I was 11 and thought myself

that these soaped-up limbs were someone else’s, that a mad
Lynchian midget had cleaved them right around the knee

and then left them, severed and floating, in my soapy water.
Years later, the same boyfriend who told me I cried

in my sleep had a different theory about my legs—he swore
that, when crossed, they looked like folded bird wings.

He imagined them exhausted from aerial sojourns,
flying trapezes following the mad law of motion.

But even he had no idea how far out I could spiral, like tonight,
at that hour when to call it mental illness would be too easy,

when I call friends up to ask them if I’m still alive,
stiffened with over-thought, ready to faint or levitate,

prone to bizarre incidents, I became convinced
that the thing clinging to the bathroom mirror

was a tiny dragon wing, and that if I ate it,
my poetry book would get published.

Maybe I turned out this way because my mother uses
phrases like, “Go put a button on your cheek

and hang a piano from it,” or because I once ate Cheetos
on the toilet while listening to heavy metal.

I know things are getting grim when I start deconstructing
cheddar things and googling “how to tell if I’m dead,”

so I tried to make my delirium into something I could serve at a dinner party, but it still reeked of loneliness and nobody

wanted it. All I could do was take night’s madness
and put it in a blender, let the choppers go at it,

silver with rage and other panics, until it reverse-rained
the mind slop I drain into Tupperware daily—

tufts of rat fur and Chinese finger traps, the last unicorn
carved up and served to tourists, my own inner Lynch movie,

complete with a mall and that ice cream for astronauts,
and beneath it all the eye of the blackbird,

avian filmmaker of my interior,
paralyzed by its own Blue Velvet.

Leslie: Thank you, Caroline, for being so honest and direct. I see that ‘My Inner David Lynch Movie’ and two more of your poems are published online here…

PrevPreviousHOW DEEP IS SCI-FI?
NextTHE ARTIST AS CARERNext
On Key