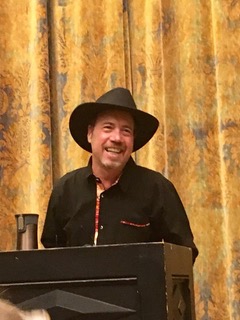 A NOTE FROM MEXICO SOUTH BY MARK STATMAN

In this guest blog, international poet and translator Mark Statman describes his move from the USA to Mexico and his feelings about President Trump’s election. As former associate professor of Literary Studies at Eugene Lang College,  Mark Statman’s translations include Federico García Lorca‘s Poet in New York, José María Hinojosa’s poetry and a forthcoming collection, Never Made in America: Selected Poems from Martín Barea Mattos, out in April. Mark’s own original poetry collections include A Map of the Winds and That Train Again.

after Julie London sings cry me a river on my phone

to the east, north east
over a green hill that rolls into itself
against a backdrop of hazy white and blue
a single cloud, once bulky
dissolves
so that there it isn’t, gone
as a single memory against memory
and against memories, remembering

And I will write that. Soon. But right now, I feel compelled to write something else.

We didn’t, but looking back only a few months, how lucky I feel, lucky we are, that we did it anyway.

We didn’t leave because of Trump. We had no clue—how many of us did? Here, the day after the election, the newspaper headlines reflected a great fear and a great horror at what had happened, Mexicans on the left and right, Mexicans in the center, knowing this wouldn’t be good for Mexico. In the market that day, I was talking with someone and he asked me how it had happened. He asked me how, if Hillary Clinton had received the popular vote, she hadn’t won. I tried to explain the Electoral College, how it worked, its peculiar logic. He shook his head. Here in Mexico, he said, we expect false elections. From the United States, we expect something better. You’re no better than we are.

Last May, 2016, at the age of 54, my good friend, the poet and scholar, Robin Mookerjee, died, suddenly, unexpectedly. Robin and I taught together in the Literary Studies department at Eugene Lang College at The New School in New York City, where I had been teaching for 31 years.

Robin’s death was a catalyzing moment for me. At the time, I was a few weeks short of my 58th birthday and this loss, sudden, awful, brought home to me in a way I hadn’t experienced before the closeness of the end of life, that at best, I was in the less than last third of my own.

And so, after some intense and careful thinking, my wife, the painter and writer, Katherine Koch, along with our son, the musician, Jesse “Cannonball” Statman, decided to sell our Brooklyn home of 25 years. Katherine and I would move to Oaxaca, Mexico. Jesse would accompany us, help set up our new home, before taking off on a 4 month tour of the US and Europe.

This was not an easy thing to do. We’re all three New Yorkers, Jesse all his life, Katherine and me most of ours. Brooklyn is a borough that gets under your skin, into your blood, the oxygen in its air has always felt essential to me. The city has been a central part of my writing, the place where I’ve done my teaching, my thinking. It’s where Katherine and I fell in love.

But our neighborhood had started to feel different, the changing skyline, the bookstores and florists, bakeries, butchers, with rising rents, giving way to real estate offices, cellphone stores, and nail salon spas.

The decision made, our home on the market, I informed the university that I was retiring from teaching. Which was pretty hard to do. Lang College had been a second home to me for a very long time. I had friends there of many years, I’ve remained close to students long after graduation. But even as someone who loves to teach, I’d been feeling more and more the pull of my own writing. Given that I still have three books left on my current book contract, I felt less like I was ending something and more like I was continuing on a trajectory started a long time ago.

What technology does. We watched the returns on CNN. The place to grieve publicly provided by Facebook. To express outrage by Twitter.

How awful is this? Since Election Day in the U.S., the peso has dropped 12% against the dollar. The Mexican economy expects to do worse and worse in the year ahead. Politicians are scrambling to figure out how to deal with the sudden forced return of citizens to an economy that can’t support them. Workers. Students. And the divided families. The worse-than-Trump-in-the-polls-President of Mexico, Enrique Peña Nieto greets the 150 or so first wave of Trump deportees in Mexico City, telling them this, their home, is ready for them. But is it? One of the greeted says to a journalist, as soon as I earn $5,000 (U.S.), I’m going to cross the border again to be with my wife.

The brightest news seems to be that that wall, should it be built, would be built by Mexican labor. The concrete provided by Cemex, of Mexico.

I’m embarrassed. Is that it? Maybe better, ashamed? As a poet, I’m ashamed of the language used, the lies, the construction of alternative facts, of alternative realities that are designed to appeal to the worst in any of us. As a Jew, whose family fled Eastern Europe, whose family died in Eastern Europe, I’m ashamed of a revision of the Holocaust, of the anti-immigrant, anti-Muslim policies of my government. As a citizen, I’m ashamed of the willingness of too many of my fellow citizens to allow this nightmare to become normal.

Somehow, though, I don’t feel defeated. Myles Horton reminds us that uniting love and social justice is a long haul. The day after the election I said to Katherine that the same work needed to be done, it was just going to be a little harder than we’d expected. And hasn’t this shaken a lot of people, a shock to a collective nervous system, hasn’t this election been a call for an unprecedented mobilization? The day of the women’s marches across the US and across the world, there was a march here in Oaxaca. Organizers expected 100 people, 200. They didn’t expect 2000. They didn’t expect this gathering of international expats, holding signs, waving U.S., Canadian, and Mexican flags. They didn’t expect that as the marchers moved from the plaza in front of the Santo Domingo church down to the zocalo, the main city square, that there would be people on the sidewalks cheering them as they passed.

Next week, Polish-born photographer ALICJA O’SULLIVAN, whose pictures have been exhibited in several major cities and in Italian Vogue, writes about what inspires her.