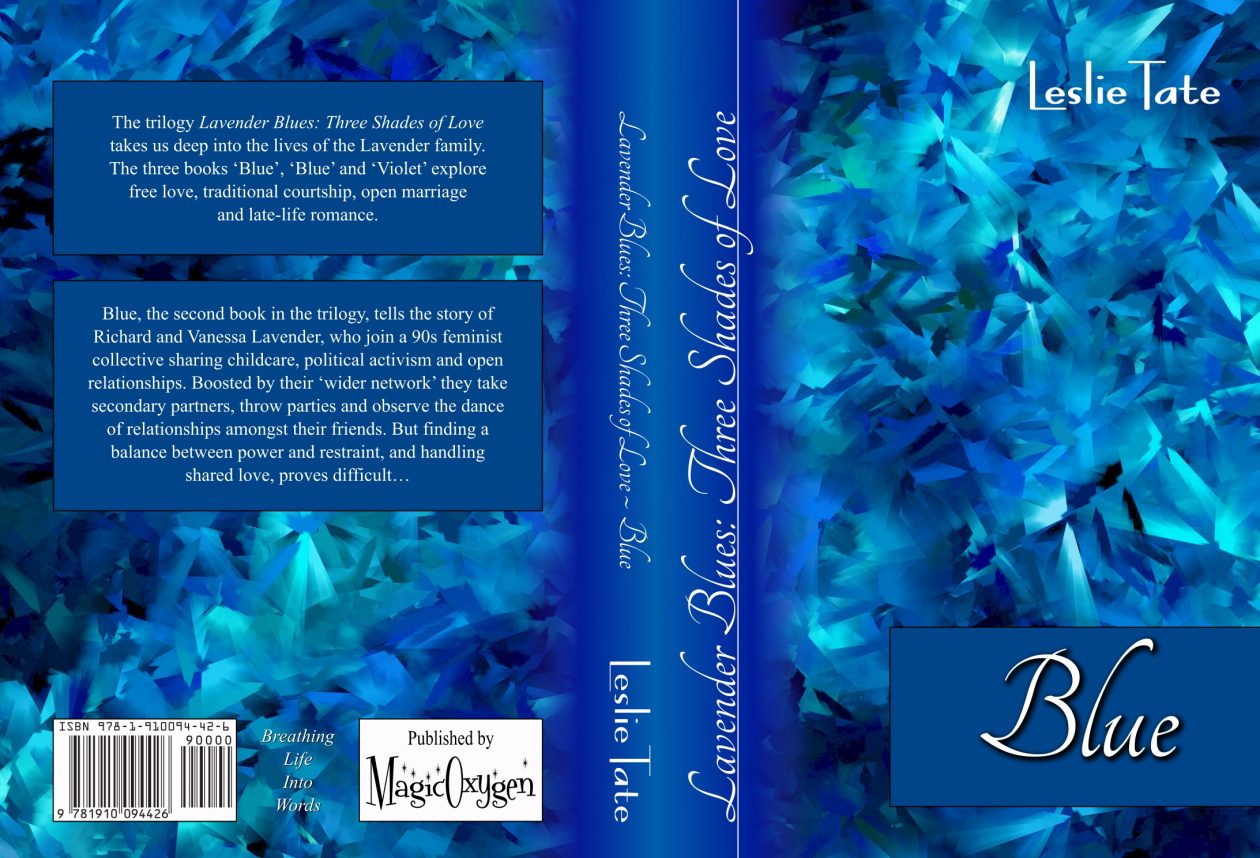 AND THEN THERE WAS BLUE

Blue, the second book in the Lavender Blues trilogy, was based on my experiences in the 80s as a member of a feminist-led collective – but shaped and adapted to fit the logic of fiction. The words and the characters were my main guide, taking me to places I hadn’t expected. The themes were feminism, marriage and open relationships, but only as they developed in their own sweet way. What I had to establish was the ebb and flow of feelings as an authentic experience, and this meant that the beginning was seminal. Like the first few bars in a symphony, the opening paragraph signposted the key, tempo and mood.

So what did I hear at the start?

Blue begins with a quiet, observational figure – with moments of unease and the word ‘enough’ running through the mind of my protagonist, Richard Lavender. By contrast, my second subject, his wife Vanessa, sails in noisily with a messy exchange with her children and her close friend Ruth. Then the narrative voice kicks in, taking us back through the first ten years of Richard and Vanessa’s relationship. The emerging pattern is: intro – smooth exposition – back to theme, using the word ‘enough’ as leitmotif.

With Blue I’d already decided that I wanted to explore a different type of beginning from my first novel. In Purple the reader is transported by the first sentence back to the 60s. With Blue the process is more close-up and gradual, showing Richard and Vanessa living in the 90s – flashing back to the 80s – with less overview. So it’s a controlled outing, a walk in the park if you like, with enough time to look around. The reader is taken into the lives of the warring couple through pacing and changes in voice. And because I wanted to fully explore the action, each incident has an element of arrest, a tableau-like dimension, as it extends itself, stretching time and space. Of course I also had to move the story on. So I repeatedly rewrote the start to each chapter, searching for shortcuts, ways of jumping through time and space without sounding false. And in that search I found that a ‘go for it’ mind-set helped. Anything was possible as long as I wrote with freedom and didn’t get too hemmed in by ‘writing school’ conventions. So my story moved according to feel, switching between characters out there in the world doing surprising things and the dispassionate study of a couple beneath the microscope.

To write Blue I needed a strong, flexible authorial voice. Rereading my first attempts I identified a register – a combination of formal and informal, in third person, dipping in and out of my two main characters’ heads – so my first draft was composed around a series of variations on that style. But when I revisited the story later, new expressive registers appeared. For instance a new beginning, with Richard’s cousin Matthew, the main character in Purple and now a professor, lecturing about relationships. His voice was witty and erudite, offering indirect comments on Vanessa and Richard’s marital struggles. It added an element of humour and a connection between the books. Other styles appeared, helping to vary the narrative, including articles, dialogues and programme notes for an exhibition. What I’d put together by the end was a collection of voices, all bearing on the same question: will Vanessa and Richard manage to save their relationship?

To do my subject justice I needed to include a consciousness-raising meeting and a counselling session, contrasting them with romantic getaways – which called for a switch between irony and poetic prose. With the counselling I had to ‘pack it in’, foreshortening hours of talk into a few concentrated exchanges before moving on to practical, slightly wacky exercises. A counselling scene could be very static, so I squeezed several sessions into one, making it possible for Richard and Vanessa to achieve tangible progress. As an author I often overlay the actual with the generic, striking a balance between the documentary and the imaginary. The process, as Susan Sontag says, makes the writer: ‘Love words, agonize over sentences. And pay attention to the world.’

In the world I’d belonged to, the feminist-led group had set out to overturn monogamy, but jealousy got the better of us. So in the book the open relationships have similar problems, but not before Richard and his ‘secondary partner’ Ginny have a wild love affair. Their romance is told largely in terms of crazy night walks in forgotten parts of the city. The normal rules don’t apply in the darkness of the park or the abandoned railway line, but the relationship does follow the well-established pattern that romantic love can be a fleeting thing.

So Blue tells a quasi-historical tale, but in the form of a satirical-romantic-adventure. It covers that time in life when couples struggle to ‘stay alive’ against the pressures of jobs and bringing up children. It’s also an investigation into modern love.

In the words of my blurb: ‘Blue tells the story of Richard and Vanessa Lavender, who join a 90s feminist collective sharing childcare, political activism and open relationships. Boosted by their ‘wider network’ they take secondary partners, throw parties and observe the dance of relationships amongst their friends. But finding a balance between power and restraint, and handling shared love, proves difficult…’

When teaching ended they went out as a foursome with Ruth and Doug, Vanessa’s friends. Meeting at college they walked to the market where students often gathered to browse and choose bargains: records for the men, jewellery for Ruth, and what Vanessa called collectables, mainly posters but also small art objects and tourist mementos. It felt like something shared, but also individual.

When they’d toured the side aisles trying on rings, examining prints and listening to bands, they moved into the concourse. It was a wide, steel-framed hall with red-tiled avenues, strings of fairy lights and low-ceilinged shops. In one corner a metal flight of stairs rose to a gallery supported by pillars. It led to a corner café where they settled, overlooking the market and the heads of passing shoppers.

They ordered coffee and Doug pulled out a newspaper. He held it up, blocking out the company, as if for protection.

Ruth stared across the table shaking her head. “Bit antisocial, isn’t it?” she said loudly.

Doug looked up, apparently surprised. Brown and round-faced, showing hirsute legs and prominent forearms, he was wedged into the railing. His eyes strayed vaguely out across the hall. “What do you mean?” he asked quietly, colouring.

“Nose in paper, when we’re supposed to be talking.”

“It’s what people call rude. Very, if you ask me.”

Doug returned to reading his paper. A ball-shaped stud gleamed in one ear.

“There you go,” Ruth continued, addressing her friends, “it’s carry on regardless. Seen but not seen.”

“Nobody’s getting hurt,” retorted Doug, peering around his print-screen. With his hair cut short and shy, boxer-like grin, he appeared to be in training.

Doug continued reading. His hand on the paper was shaking.

When Doug remained silent she poked at his broadsheet, “’ello ’ello, is anyone there?”

Twisting sideways, he pulled out of reach.

“Anyone at home?” Smiling falsely, she screwed one finger to her head, “OK, OK, ignore us. Read your bloody paper. No one else counts.”

Doug, still reading, raised his head and started to reply. When Ruth cut in, calling him a boor and a me-only type, the one who got away, he put aside the paper and fixed her with a stare. “Stop it woman,” he grunted, and sat back. Something indeterminate held him, a clear eye out. He’d better things to do.

Ruth grimaced and turned to Vanessa, inviting her views.

Her friend was non-committal. “It’s all right,” she replied, avoiding Ruth’s eye.

“A man’s gotta do,” put in Richard, grinning.

The coffees arrived and were passed around the table, cappuccino to Ruth, black for Vanessa, regulars for the men.

Turning to Ruth, Richard enquired about her time on practice.

“Oh that,” she snorted, reaching for her cup. “Well, all I can say, if that’s what teaching’s about.” She shook her head savagely, staring around the hall. “I mean the staff were great, really helpful, but the kids…” Gulping down a mouthful she pushed up to the table with a calculating stare: “’ere miss, you one of ’em students? One of ’em weirdos. Cos if you is, then you better be careful.” She pulled back with a shiver, “And that, by the way, was on a good day.” She cut to her coffee, draining quickly. She was observing Doug more gently now.

When Richard prompted, asking how she’d coped, she launched in again, putting on voices and taking parts before declaring loudly that school was not for her. She ended, white-faced, staring at the table. Her gaze returned to Doug and she ran one finger lightly across his arm. “He knows. He’s seen me afterwards.”

Doug confirmed. The set of his face lifted as Ruth reached for his hand. In her eyes there was gratitude and a hope of understanding.

“Because he’s my Doug,” she added, coyly.

When they left she was leaning, holding herself sideways, tucked in to his body with her eyes half-closed. Beside her Doug stepped out, narrowing his gaze and facing forward with a slightly child-like, self-absorbed smile.

PrevPreviousTHE MUSIC OF RESISTANCE
NextHIRAETH, SACRED STORIES AND THE HISTORICAL NOVELNext
On Key