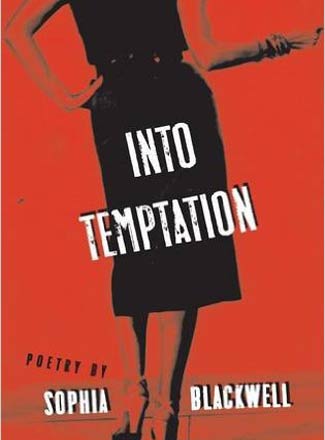 I interviewed poet and author Sophia Blackwell about LGBTQI visibility in British writing today. Sophia, who hosts regularly for Apples and Snakes, has performed at the Glastonbury and Edinburgh Festivals. Her writing has appeared in Trespass, Rising, Fuselit anthologies and Pen Pusher, the Oxford Muse book, ‘Guide to an Unknown City,’ and in Paul Burston’s anthology of gay short fiction, ‘Boys and Girls’ and its follow-up ‘Men and Women.’ Sophia has three published books: two poetry collections, Into Temptation and The Fire Eater’s Lover; and a novel, After My Own Heart.

Leslie: Can you take us through what made it possible for you to become a self-identified lesbian performance poet, please?

Sophia: I inherited the performance gene from my father, a musician. I always had a great capacity for showing off: at a party when I was seven I screeched my way through ‘Happy Birthday’ on the violin and then said to the guests, “Thank you, would you like some more?” My mother raised me to think that what I said mattered. She’s always danced, but has just started doing solo public performances in her sixties. She’s a real inspiration to me.

I realised in my early twenties that when I combined my words with performance some kind of alchemy happened; people wanted to listen to me. I was very naïve at the time and I didn’t know how to progress, what style to adopt, or who to approach about publication or recording. I was helped during my early years in Oxford by Steve Larkin, who guided me through the first minefields of performance, and Alan Buckley, who gently encouraged me to be a stronger writer on the page.

Leslie: Can you describe, please, the world the reader enters in The Fire Eater’s Lover? Who were your influences – why them?

Sophia: The Fire-Eater’s Lover began with an online project called 52, run by the poet Jo Bell. Everyone who took part in 52 was challenged to write a poem a week, and that’s why my collection roughly spans a year, beginning on New Year’s Day and ending on New Year’s Eve. There are a couple of poems in there about Spring and Summer, but for the most part they’re set in darkness; a fertile, street-lit darkness full of ghosts and memories that’s very recognisably London, populated by the people you meet in nightclubs, on buses and street corners. While I was writing it I was inspired by the poetry of Michael Symmons Roberts, Roddy Lumsden and Ian Duhig. My poems are very different to theirs but I liked that they had set out to do something ambitious and original; their poems are bold, and I wanted some of that audacity in my own work. I felt very aware that my first collection was largely made up of performance poems, whereas the poems in The Fire-Eater’s Lover had to stand or fall on the page.

Leslie: Can you describe the barriers/issues that face LGBTQI writers and performers when addressing an audience? What are the questions we find ourselves faced with?

Sophia: In the early days, when I did a lot more gigs in bars and nightclubs, when and how to out myself to the audience was always an issue. Some people read me as straight, so I had to negotiate that, and my gay friends who have never passed as straight, or wanted to, have had to deal with their version of that too. No artist wants to be pigeonholed, but it was important to me to step up and be visible. I remember that all the posters from my early career would describe me as a ‘sassy Sappho’ or ‘lesbian feminist warrior princess’ that sort of thing- it seemed somehow important that people were prepared for my sexuality! As I get older, I gain more confidence: if I change how someone feels about gay people or help them to come out, that’s wonderful, but it’s not the only thing I’m here to do. I am not here to educate or charm straight people; I am not your teaching experience. When I teach, I do it in a classroom and I choose to set aside that time to engage with young people and answer their questions, but I don’t do it in my poetry any more. I no longer feel I have to justify my presence on that stage.

Leslie: You co-organise ‘Invisible Outlaws’ with Laura Macdougall. Can you describe the idea and aims of this venture? How did it come about and what have been the successes so far, please?

Sophia: During the UK-wide celebrations of the anniversary of the homosexuality’s partial decriminalisation, some of us were dismayed that so much of the programming and writing commissioned was by men, with very few trans people, bi people, or people who were or had ever been identified as female. Hence the title ‘Invisible Outlaws.’ What we talk about much less than our sexualities being illegal or punishable by death is the feeling of existing in a grey area- something that trans people still experience a lot today, by the way- where what you do and who you are isn’t exactly illegal, but you don’t know what your rights are and no one’s in a hurry to tell you. On paper, you don’t really exist. And our exclusion from most of the art commissioned for the celebrations added to a sense that a lot of us- the LBT in LGBT- can be easily written out of history.

The event was everything we could have wanted, really. One of the best things about organising events is choosing the panel and to get, Stella Duffy, Joelle Taylor, Jake Graf and Olumide Popoola all together on one stage – I think I speak for both me and Laura when I say it was an honour! As well as showcasing all the participants’ art- which in Jake’s case was screening one of his films, while the others performed poetry or read from their novels – it was a robust intellectual debate. Not all of the panellists agreed with each other- some of them were disappointed in the increasingly corporate and anodyne nature of Pride, whereas one panellist had a positive experience of the event. There is no right or wrong way to be LGBT! One of the things we all agreed on, clearly, was the importance of working with young people. All of us give our time to initiatives like Diversity Role Models, Mermaids, Fun Palaces and Slambassadors. I found that quite humbling too. We’re talking about internationally successful authors- and in Jake’s case, directors. We haven’t abandoned those kids, no matter how busy we become – and I think that matters.

Leslie: In what ways does LGBTQI writing deal with experiences universal to the human heart?

Sophia: The thing about coming out as LGBT is that it means you’ve made a decision at some point in your life, early or late, to live as your truest self. You’ve already had to go through things a lot of straight artists haven’t experienced; a life’s worth of coming out and showing up, day after day, knowing that there are people in the world who would much prefer you to keep silent. So when you’re a gay artist, there’s a certain amount of commitment there.
This doesn’t mean that LBGT people’s art is better than straight people’s art, but that we have already made sacrifices to be able to tell our stories. By choosing to be our authentic selves in a world where the odds are stacked against us, we’ve started from a different point, further away from the finish line.

I’ve had years of trying to explain my sexuality and everything that comes with it, and I think that qualifies me to explore the human heart with sensitivity and not assume that my experience is the same as everyone else’s.

Next week, writing from Norway about THE CULTURAL SCHOOLBAG, Bente Reimers Moe describes the diverse and exciting ways Norwegian children (and adults) are encouraged to enjoy the arts.