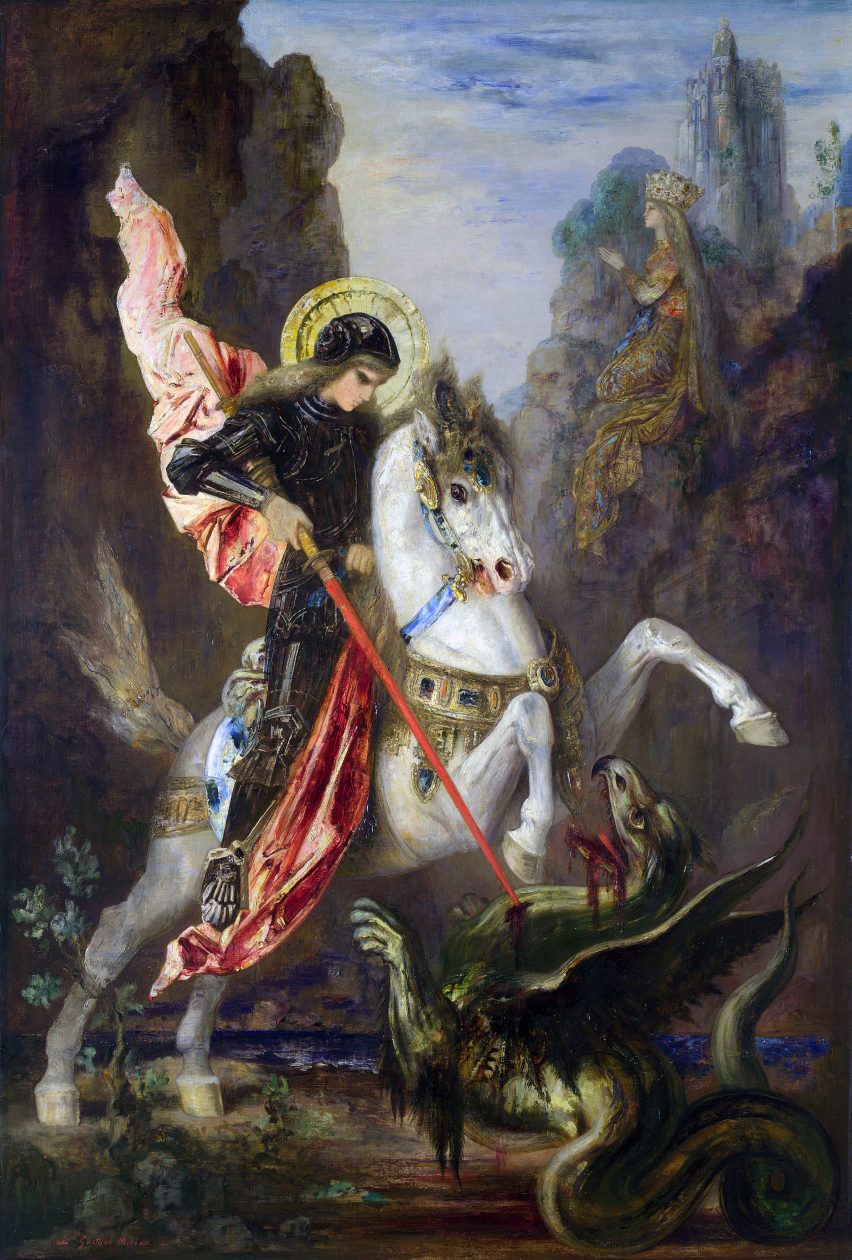 BETH IN THE UNDERWORLD

The extract below, taken from my novel ‘Violet’, is connected to a childhood memory.

Looking at a picture, a personal memory: One of my favourite spots in my grandparents’ house was the landing upstairs. What drew me there were the albums and travel books I found in the large white cupboard built into the wall. My favourites were the illustrated hardbacks with titles like ‘Stories from Around the World’. When I opened them I found, on one side of a double page, large-print words in Gothic script, on the other side, colour plate pictures behind see-through paper. I remember the reproduction of St George and the Dragon by Gustave Moreau. To me, this picture had a floaty feeling. Having no idea of French Symbolism, I saw it as pure image outside time, without any reference to Raphael or art history.

Beth looking at  a picture: To capture that sense of unmediated experience, I wrote the passage above about my protagonist looking at a picture with her friend Meg. My aim was to keep it simple because death – in this case the loss of Beth’s gran – is best underplayed. The subject itself is powerful enough not to need rhetoric. So, for instance, when the Duchess of Malfi faces death the elaborate Jacobean metaphors all fall away. In the extract, the simple naming of details from Rossetti’s portrait of Jane Morris carries the emotion. And not naming the picture quietly reinforces Beth’s sense of absence and loss. Meg, acting as her foil and echo, takes on that loss. In their innocence, the girls don’t understand the source of the picture’s dark sadness, but what we know about Jane Morris’s personal history adds another layer, and the myth of Proserpine deepens it further.

Dante Gabriel Rossetti’s painting Proserpine shows his lover Jane Morris as the Roman goddess who lives in the underworld during winter. In the seasonal myth, Proserpine, daughter of Ceres, is gathering spring flowers in a meadow when Pluto forcibly carries her off to the underworld. Ceres, in her grief, searches for her lost daughter and neglects the Earth, causing nothing to grow. The starving populations join Ceres in an appeal to Jupiter, king of the gods, asking for the return of her daughter to Earth. Jupiter agrees on condition that Proserpine has not eaten any fruits in Hades. As Proserpine had eaten six pomegranate seeds, Jupiter rules that she should remain in Hades for six months of the year and be allowed on Earth for the other six.