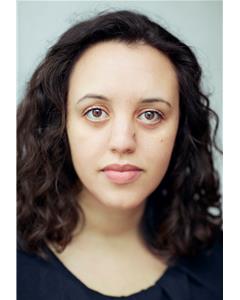 I interviewed Nadia Nadif, actor and theatre activist. Appearing with innovative theatre companies in a wide range of roles, Nadia has taken part in family shows (including learning how to stilt walk!), plays about domestic violence, and performed a Sudanese trance dance as part of a production at the Edinburgh Festival. She has also toured the Middle East with a comedy-farce show.

I began by asking Nadia about the pivotal role she played in creating The Scar Test, a challenging exposé of the UK’s inhumane treatment of refugees in detention.

Leslie: You acted in ‘The Scar Test’. Can you explain the title and the content of the play, please?

Nadia: The Scar Test refers to Rule 35 which states no one should be detained or locked up in the UK if they have suffered torture in any country. The content of the play explores life inside Yarl’s Wood Detention Centre, in Bedfordshire.

Leslie: What was your role as an organiser and actor in the play? How did you prepare for your parts and what were the challenges you faced in playing them?

Nadia: I had the idea to do a play about immigration detention and when the brilliant Hannah Khalil agreed to write it, I co-produced its first outing in 2015. I then spent two years applying for funding, tour booking, developing and fundraising for the show to be produced in 2017. I played five characters in the play – Lily a translator who was unsympathetic to the plight of certain women inside the centre; Amina, a woman who came from Morocco to Libya as an economic migrant, but then fled to the UK following the conflict and unrest there, who was tortured by smugglers on the journey to Europe; Gurpreet, a woman from West Bengal who was illegally trafficked to the UK; Lisa, a teacher who volunteers with the Yarl’s Wood Befrienders and Dave, an officer working in Yarl’s Wood. The challenges included playing characters based on real people as you want to do them justice, and the fact that we each played a few parts which changed on stage without costume and make-up changes! I prepared for the roles by doing a lot of research, meeting people who had been held in detention and had worked or volunteered in detention, by working with our movement director Sinead O’Keefe to explore different physicalities and breath for each character, and by doing lots of off-text improvisations with the cast set by our director Sara Joyce to explore what happened in between the scenes.

Leslie: Can you offer a few anecdotes about the key roles you played before ‘The Scar Test’ –what did you learn from them?

Nadia: I have been lucky enough to play very exciting and diverse characters. I loved playing Megh in Unsung (Wiltons Music Hall and tour) by Ayndrilla Singharay. Playing Megh taught me that strong women can also experience domestic violence, and that we need to stop victim blaming. I learnt how to stilt walk playing Maxine in the family show Carnival Collectors and the Memory Machine (Art Deco Theatre, Northampton). And I learnt about 1950s Sudan including how to do a Sudanese trance dance playing Naima in Burst (Zoo Venues, Edinburgh Festival).

Leslie: Can you tell a few stories about the key people who drew you into acting from childhood onwards – what did they teach you?

Nadia: My sister Sarah was my very first audience member so I was always creating shows for her in our bedroom since I was about six or seven. I guess that was my first experience of immersive theatre. I would make ‘magical worlds’ for her to explore out of bedsheets and sofa cushions and play different characters she could meet along the way, including Father Christmas! The Mercury Theatre in Colchester played a big part in my becoming an actor. I began at Colchester Youth Theatre at the age of fourteen. My leader Annie Eddington taught me to be true to the text, and I performed my first Shakespeare play with her. Miranda Bell, Adrian Stokes and Tony Casement were also very supportive and taught me about training options, the importance of learning lines early on and having a professional attitude.

Leslie: How have your ideas about how and what to act changed since your first appearance in a production? What incidents caused you to shift your views?

Nadia: I am quite careful not to do scripts I think are sub-standard or play parts that I feel will push a negative political agenda (for example I won’t want to audition for characters that are written one-dimensionally). In terms of how to act, being a part of the wonderful company The Factory, has revolutionized how I do Shakespeare and Manuel Puro’s brilliant self tape challenge has changed how I audition for and approach film roles. Both have taught me the same thing, to be playful and creative and not feel restricted by popular notions of how to play certain roles – you can put your own signature on a role and have fun with it.

Leslie: Can you describe particular moments when working collectively that have helped you as an actor?

Nadia: In The Scar Test and in Unsung we never left the stage and as a cast all worked together to do the set changes in character. These set changes became part of the performance and I enjoyed the fact that collectively we built up the world of the play to all ‘live onstage’ together for the length of the play.

Leslie: Would you like to describe ‘Our Passion’, which you toured to the Middle East? What are the themes/content of the play? What’s your role in it and how did this tour come about?

Nadia: Our Passion was a comic three-hander farce which toured the Middle East to audiences of Mercedes Benz employees. It is set in a car showroom and is all about the experiences different customers have when buying a car. I played the comic lacklustre sales assistant in Jordan and Lebanon and then the leading role of the impatient doctor trying to get a good service in Oman. The tour came about as Brand Biology, one of the leading companies in forum theatre/coaching in the corporate world, was commissioned to create a piece of theatre that would be entertaining but also reflect issues in sales environments in the Middle East. I auditioned for them in late July and we started rehearsals in September. It was a great way to see the world, and nice to do a straight farce after performing in such a political show like The Scar Test.

Leslie: Do you see the stage as a way of campaigning around immediate issues or is it more about eternal human values? What’s special about the live actor/audience relationship?

Nadia: I see the stage as a way to bring immediate issues to new audiences, through showing eternal human values, perhaps within unknown characters. The best thing for me about doing The Scar Test was when women who had been held inside Yarl’s Wood and other detention centres came to watch, with their befrienders and thanked us for putting their lives on stage. One woman said “we thought no one cared and you proved that isn’t true.” In a wider sense I am delighted that this issue is now constantly discussed on Women’s Hour, after two representatives came to see the production twice and interviewed playwright Hannah Khalil and befriender Heather Jones about the stories inside the detention centre.

(You can read reviews of The Scar Test here – Leslie Tate)

Next week, Leslie Tate tells the story of appearing in the Talking Genders LGBTQI Senior Exhibition, ‘Landscapes‘, in Aarhus, Denmark.