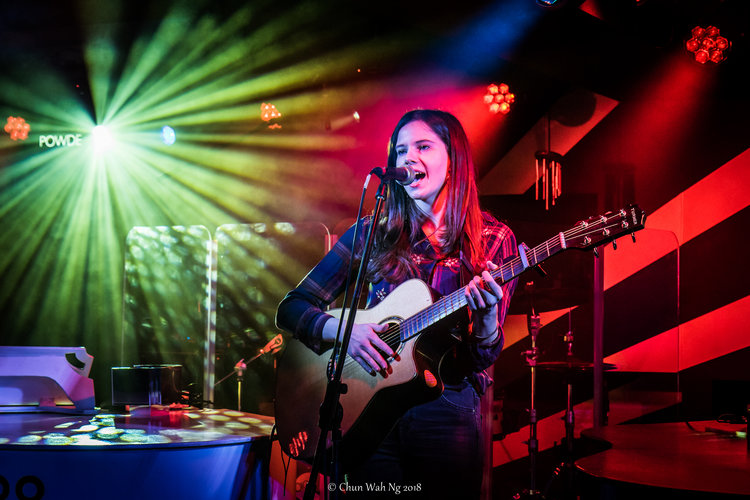 I interviewed campaigning busker Zoe Wren, whose latest EP Gold and Smoke, released on Folkstock Records, retells traditional folk stories in a contemporary way. I asked Zoe, who was shortlisted for Best Female Solo at the NMG Awards, about the reality of licensed busking. I also asked Zoe about her musical career that includes winning the PRS Lynsey de Paul Award, being named Laurel Canyon UK‘s Favourite New Artist of 2018, and opening for acts such as Chris Leslie of Fairport Convention and Ralph McTell at the Cambridge Corn Exchange.

Leslie: What’s the story of you first becoming a busker and how did it develop?

Zoe: My first ever busk was when I was about 14 years old. I went with a friend to Camden Lock, where I grew up, and we sang a few songs, had a laugh and made probably less than a tenner. But since then I’ve busked quite regularly in Camden, mostly in the market. I entered the Big Busk competition in 2013 where musicians perform at busking spots around London trying to win votes. I didn’t win, but because I made it to the live round, I was later given the option to be fast-tracked to the official London Underground busking auditions (without having to apply and wait for about 2 years!) so I went and auditioned and now here I am!

Leslie: What are the ups and downs and ‘unwritten rules’ of being a busker? How does it differ from a gig?

Zoe: The most varied part of the job is the different people you meet. I chat to some really interesting characters, make new contacts, and entertain people who stop to listen. The downside is people who want to grab your mic or guitar, or who shout requests (or just rude things) at you mid-song. I’ve also been robbed once. But you develop strategies for dealing with everything.

As a London Underground busker, most of the rules actually are written – there’s an online booking system where you pick your pitches, and each slot is 2 hours. One of the most important ‘unwritten rules’ is about being speedy moving off a pitch when your slot ends – if you’re on a less desirable pitch you’ll usually have a friendly conversation with next busker, but if you’re on one of the top spots like Tottenham Court Road or Piccadilly Circus, then cut the chit chat!

I guess you can think of busking as a kind of gig where the ticket price is flexible and the audience all drop in at different times. But as a busker you have to work a bit harder to draw people in – some people want to stop and listen, others just enjoy catching a few lines as they pass by. You have to be ok with being background music and playing plenty of covers – busking is not for people with big egos!

Leslie: What are the most memorable stories from your experience of busking?

Zoe: The weirdest thing that’s ever happened to me was when a guy dropped a box containing a beautiful ring into my case, which looked suspiciously like an engagement ring! But he didn’t stick around so I will never know the full story (though that didn’t stop me making up one and writing a song!). I’ve also been drawn by a sketch artist, accidentally been included in a wedding shoot, been booked to sing for the Comedy Store, and featured by Instagram ‘celebrities’ such as a Brazilian Christian rock band and a famous toy poodle. Oh, and I sometimes get people (kids and adults alike) doing full-on dance routines to the music – I love that!

Leslie: Who have been the most striking buskers you’ve met – what was special about them?

Zoe: There are some brilliant musicians on the Underground, covering everything from harp to saxophone to opera singing. Perhaps the most memorable is the chap who performs with his handmade mechanical monkey puppets who play mini instruments and sing along as a chorus. Steve Aruni –if you’re curious. They do a mean version of Bohemian Rhapsody, though I’m not sure if that one’s online!

Leslie: You’re involved in a campaign for buskers – what’s it about?

Zoe: A few months ago, Transport for London started introducing digital advertising boards, which they decided to place behind the busking pitches. It wasn’t long before the advertising company complained that the buskers were blocking the view of their boards, so TfL started moving busking pitches. But then they actually decided to close a pitch down (one of the most popular ones at Leicester Square), and we knew they’d continue to close pitches if they got away with it, which is why the buskers decided to take action and start a petition.

With independent venues closing everywhere, we keep seeing live music being suppressed by corporate powers, so we didn’t want to let them win this time – not only were the buskers here first and add much more vibrancy to London’s culture than an advertising board, but we actually draw attention to the adverts because our performances are regularly filmed and shared by passers-by! The good news is that we got over 2000 signatures and lots of media coverage, and TfL agreed not to close the pitch, but to come to a compromise by moving it. It was really lovely to see how many Londoners do value having live music around the city.

Leslie: As a professional musician signed to a label, can you tell us about your music, your awards and the schemes you’ve been involved in

Zoe: I’ve released two EPs to date, both with independent label Folkstock Records. My most recent EP, Gold and Smoke, was based on taking traditional folk tales and giving them a bit of a twist – and in a few cases a feminist update! It was funded by the PRS Foundation’s Lynsey de Paul Prize, which I was very humbled to be chosen for. (Leslie: Tickets for the launch gig on July 4th can be bought here.)

I’ve also had a track played on BBC Radio 2, and played a lot of cool gigs from the Cambridge Folk Festival to appearing at the top of The Shard! I split my time between playing solo (or occasionally with a band that joins me for bigger gigs) and in my new Americana / Folk duo called Roswell.

Music outreach is really important to me, so I’ve been involved in a couple of charity schemes. While at university I was part of Sing Inside, a student-led charity that takes singing workshops into prisons, and I’ve recently been accepted onto Live Music Now, a scheme that provides training and opportunities for young musicians to perform for audiences who don’t often get the chance to see live music, such as older people in care homes and children with special educational needs. Music has had such a positive influence on my life, so I think it’s so important to try and share the love a bit!

Leslie: How did you learn your musical techniques? What have you found comes naturally and what have you had to work hard at?

Zoe: My training is actually in classical piano and singing, so I’m self-taught on guitar. The main way I learn new techniques is by hearing something I like and deciding to learn it and steal it! YouTube is a great teacher too, as is just experimenting. I remember the first time I tried out an alternative tuning on the guitar (DADGAD) – it was love at first play, and since then I’ve been obsessed with discovering new tunings and interesting chords. In that sense, Joni Mitchell is a big influence, as is Martin Simpson. I also try to keep working on new techniques like tapping and percussive playing. There’s no way other than to keep practising!

Leslie: What’s the difference between your music when you play as a solo artist and when you play with Jasmine Watkiss as Roswell? In each case, what are your compositional quirks and personal methods? What helps you to perfect a good song?

Zoe: As much as I enjoy gigging solo, there’s something so wonderful about playing with another musician, especially one as talented as Jasmine. Singing in harmony gives me absolute joy, and one of our Roswell trademarks is that we love to harmonise, the more intricate the better. When I’m writing for Roswell it’s a different experience because we collaborate and bounce ideas off each other and there’s also more to think about in terms of the arrangement of different instruments and voices! I think a song is never finished until it’s been gigged live several times – seeing what works well with my audiences is very important for me, and I’ll often make changes after playing songs live.

Leslie: How has busking, gigging and making solo and/or group music changed you as a person?

Zoe: As a musician, every day is different and you often end up in strange places or situations on your own, constantly meeting new people, so I think the biggest impact it has had on me as a person is making me very open-minded and flexible. I used to be quite shy, and music has not only made me more confident about tackling new adventures but also about expressing myself.

Leslie: Thank you, Zoe for a great interview… and in case anyone missed it, tickets for the launch gig of Zoe’s new EP on July 4th are on sale  here!