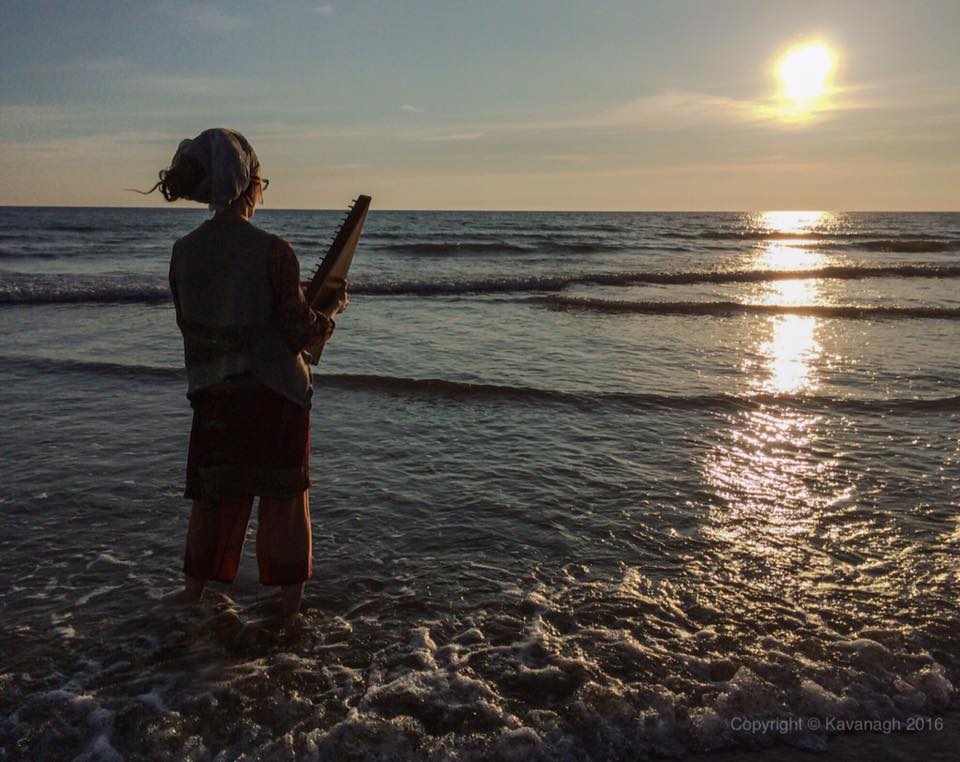 In Part Two of my interview with Ailsa Mair Hughes she talks about working with musicians, circus performers, storytellers and exploring indigenous music.  Ailsa describes several creative projects, including her ‘Moonchoir’ and  ‘Soundmapping’ and the healing power of ‘the myths of the land where we live’ .  In all of her projects, Ailsa says that she brings with her, ‘A passion for the connection between music and nature’.

Leslie: What have been your most exciting artistic collaborations so far – why them?

Ailsa: In 2016 I worked with the RSC on Cymbeline, standing in for musician Sianed Jones. It brought me back to playing the bass viol/viola da gamba for the first time in years (I had learned it at college) and was a total thrill. I had to do my first show without a rehearsal and my first entry was a loud, improvised vocal passage we only half-jokingly called ‘shamanic yodelling’. This show led to me and Sianed forming Tinc y Tannau, which is a total joy.
I also worked with a magical aerial circus company called Whispering Woods for several years. This was the beginning of my love for working outdoors. The shows we made really challenged me to get in character and not just ‘hide’ behind an instrument, too.

Another collective I’ve collaborated with are Ombiviolum, a fusion of Zimbabwean and Celtic sounds, who bring an element of ceremony to rousing performances.

Last but definitely not least is the huge bubbling pot of storytellers I have worked with- each so different! These include two dear friends, the magical Milly Jackdaw, who was the first storyteller I worked with, and opened me to this entire world, and Peter Stevenson, a prolific storyteller, illustrator, folklorist and writer, who has probably been my most extensive collaborator. Our latest show, The Moon-eyed People, is all about the Welsh-Appalachia connection and told partly through the medium of crankie, an Appalachian device that allows an illustrated scroll to be turned through a box whilst telling the story. Over the years, Pete has been a true inspiration, role model and great support to me, and has taught me the art of bringing different elements together into one unique thing.

Leslie: Can you describe ‘Moonchoir’, please, and the role you’ve played in it.
Ailsa: MOONCHOIR was birthed in January 2018, during my project ‘13 Moons of Music’, which was a year of recording improvisations in the landscape supported by the Earth Pathways Seed Fund. It became a fortnightly, fluid group honouring the moon cycle, with playful and soulful new moon workshops and outdoor full moon adventures. I have been passionate about the liberating effects of playing with our ‘wild’ voices for a long while now, giving people permission to sound rather than ‘sing’, and sound however the moment guides them. My role has been to mainly to hold a safe space for people to explore, and encourage a deep listening, to ourselves, each other, the land and cosmos. MOONCHOIR is currently evolving into a new phase of ‘Spontaneous Sacred Song’ workshops – please see my website for more

Leslie: What do you mean by ‘Soundmapping’, please?

Ailsa: Soundmapping is something I started last year in my hometown Machynlleth as part of a social enterprise called Wild Notes/Nodau Gwyllt, It is a process of getting people to depict their favourite sounds from the landscape, or – in the event of a ‘soundwalk’ – sounds we have heard e.g. birdsong identified on the walk. What counts as ‘natural soundscape’ is of course questionable, and part of a discussion I hope to open up in the Wild Notes blog. I did the first Soundmap at Machynlleth Climate Fayre in April 2019 and have put together about 5 since. You can contribute to an ongoing SOUNDMAP through my blog.

Leslie: Can you tell us what you’re learning about at the School for Oriental and Asian Studies and what it has inspired in your music?

Ailsa: SOAS is very diverse, and whilst studying there I’ve particularly loved learning more about Mongolian musical culture, musical ritual and shamanism, as well as Saami musical culture of joiking. My Masters in Ethnomusicology has so far included exploring ‘Eco-musicology’ and ‘Music & Development’, and got me thinking about how I can best use my own musicianship in a regenerative way for people and planet.

Leslie: How, and in what way, do myths and legends shape your creative output? Which stories are you drawn to, and why?

Ailsa: I’m most drawn to stories with a strong musical element, particularly ones where song is used as a healing tool within the storyline. The first story I worked with was the Inuit tale of Skeleton Woman (a version of which can be found in Clarissa Pinkola Estes’ famous compendium ‘Women who Run with the Wolves’). I found it transformational. This became a seed of inspiration for a story I wrote myself and performed at the Aberystwyth Storytelling Festival in Autumn 2019. Over the last few years Welsh folk tales – particularly collected by a long term colleague Peter Stevenson – have been vital to my creative identity. I believe that to know the myths of the land where we live is a way to awaken a deep sense of belonging and potential to heal ourselves and the earth at the same time.

Leslie: What characterises your environmental actions?

Ailsa: Well I try to give my greatest strength, which is musicality, at actions. I have often sung, taught songs and performed with cello, much of it entirely improvised! At the Extinction Rebellion actions last October I genuinely felt that what I was sharing was of real value. I find a bolder version of myself emerging which will take me to sing for hours in the middle of a main road in London, or to the police line at a fracking site. I’d say that actions bring out the best in my musicianship because it feels like there is a direct, tangible benefit. To be flexible is essential – I find it works best to go prepared with loads of songs but with the willingness to ditch them all, and improvise, working with the situation and the people – including other performers. I just had the best time floating around London last October tuning in with the attitude of ‘where and how can I best be of service?’ and I am taking that to the heart of my musicianship in general.

Leslie: Wildcard question: What would you like to talk about that you haven’t mentioned so far?

Ailsa: I’m remembering that I am not ‘just’ a musician. I create in a whole variety of ways including weaving, spinning, binding notebooks and writing poetry. Even though it’s important to hone one thing, it’s also vital to not limit our creativity and put ourselves in boxes. All aspects of artistry can inspire and feed one another.
One thing that I would recommend to anyone with a creative block is Julia Cameron’s book ‘The Artist’s Way’, and especially her practice of writing three freehand ‘morning pages’ each day…
Also, I feel to mention the importance of ‘silence’ – music is nothing without this. Meditation is an important aspect of my practice, as is going outside and listening to what the wind and the birds are saying. And silence is often a pre-requisite for the song that feels truest, and comes organically from this place.

The key thing, maybe, is that for me, sharing performance has become like sharing ritual, and above all else, I want to share myself – or whatever comes through me – authentically, as authenticity is necessary for healing.

Keep posted via my website for news of my new live album The Bridge and online storysharing circle STONE SOUP,  and if you like you here can support me at Patreon to receive exclusive creative offerings from my Cauldron of Regeneration.

Next week I interview children’s book illustrator Sarah Lodge, who has been shortlisted for the AOI World Illustration Awards New Talent Award.