MARK CRANE – EXPLORING BETWEEN THE PANELS OF OUR LIVES

‘Once you accept a symbiosis between all things then creativity is somehow easier. We don’t see a tree as separate from the earth or the sky. It needs them all as much as we need it’.

After UK art and stage school my interviewee, Mark Crane, went to the USA to study on-screen make-up under Bert Roth from ABC TV. Mark has worked on film special effects for Labyrinth, Superman IV, Mary Shelley’s Frankenstein, Judge Dredd and Nightbreed. He has provided camerawork and visual effects for art projects in The New Forest, Florence and the Venice Biennale. He has also starred as Medvedenko in The Seagull and Mercutio in Romeo and Juliet, and written and directed several original stage shows. His innovative film, Jason, based on the Argonautica, will premiere at Berkhamsted Live on Feb 24th. I asked Mark about his creative methods and influences, which range from blockbuster to arthouse.

Leslie: Which art/writing has had most effect on your creative work?

Mark: Not all my influences are literary or traditionally art based. Some are musical as I find music can create a feeling that fully transports your imagination and on other occasions you can find a street corner or a particular light or sound, an ambience or feeling that is unexpected and immersive. I love electricity pylons and watching the billowing steam emanating from power stations. I love derelict buildings and decaying mansions. Broken machines and the whirling crackles of electricity or the snapping of a fire and the beads of hot coal floating like dust motes. We can all drift off looking into space at these times, when your mind becomes empty and pliable. The darkness or the light can come in and you find that ‘thing’ that ignites your imagination. That ‘thing’ can come from anywhere and at any time.

I want to be open, alive, alert as much of the time as I can to possibilities. I don’t shut the door on any influence. The moment you put restrictions on your imagination you are not fulfilling your potential. Which is a great loss. If we are talking about individuals, I think David Lynch’s output has had a great influence on me since art college in the early 90’s. I think it’s the combination of desire, sound, vision, sex, smoke and fire and a sense of just being outside, on the fringe of something beautiful or dark that echoes in our lives. Sometimes we peek through the crack and sometimes we dive in. For all the talk of surrealism and Lynchian strangeness… I find his films the most genuine interpretation of life. 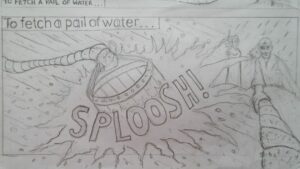 Comics played a huge role in my teenage years. They developed my sense of scale, the space between movement and how our minds create dynamic motion in the gutter between panels. I loved 2000ad with its darkly visceral, nihilistic vision of Utopia gone bad. If most people had punk music in 1977, I had 2000ad. I preferred DC comics to Marvel. I can’t really tell you why but it just seemed more grown up. It wasn’t of course. Superheroes were/are mythical (and no doubt biblically influenced) characters who spoke to me in ways that mythical religious characters couldn’t.

I could talk about Jean Dubuffet and outsider art in general, Mark Rothko, David Bowie, Orson Welles, Albert Camus, Franz Kafka, Frank Capra, Cohen Brothers, Stanley Kubrick, Diane Arbus, Garry Winogrand, Fellini, Super Nintendo, Watford FC and so much more. It really is a constantly growing list and I’ll probably kick myself for leaving out some things I truly love. I can’t leave this list without a mention of my love of videogames. Ignore them at your peril. They are big. I mean HUGE. There is a future in videogames and gaming that we haven’t even seen yet. What that will be I could only guess. It’s exciting and full of potential. They can be beautiful things.

I love football. There is something so divisive yet unified about it. It is life distilled into pure energy. Standing amongst twenty thousand other people experiencing this improvised drama together, it has unity, enmity, fear, passion, sadness, heartbreak all experienced within a matter of seconds. It is physical, beautiful, funny and cruel.

In the late 70’s came Star Wars. Without Star Wars I would never have worked in the film industry. After watching it, I thought; ‘Whatever that thing is, that’s what I want to do’. It was a truly great period of films from 77-87. Close Encounters of the Third Kind, Raiders of The Lost Ark, Ghostbusters, The Goonies, Gremlins and Back to the Future. I had great friends and we’d all recreate these films in the playground, at home and in our heads. In addition to this, my increasing interest in special effects would lead me into a career in the film industry. All of this led to working on Labyrinth, Superman IV, Nightbreed and Judge Dredd. I had a wonderful experience that still informs me today.

Leslie: How do ideas for plays and films come to you? How do they change as you work on them?

Mark: They can come when I’m walking down a street or staring into the fire. They can arrive by surprise or when I’m going to get a pint of milk. Ideas for whatever endeavour, be it artistic or philosophical are always evolving and adapting to reemerge in new ways. I like to remain open to possibilities. In directing I find the actors can find unique solutions to situations which in turn feed your imagination to push the story in new ways. Open heart and open mind will always lead to a new solution.

Leslie: What artistic mediums do you choose to work in? How does the choice of medium change the artistic process and outcomes?

Mark: I paint, make comics, film and write. The same process is involved in all of them. All art conveys a message or story to me. It can be immediately interpreted or can arrive in dreams and thoughts over many months. Sometimes a piece of work can sit for months, years even and finally resurface as something prescient, vital and relevant. So often people compartmentalize things. It just makes life easier I suppose. I find that all art is linked. There is no distinction between most things. Once you accept a symbiosis between all things then creativity is somehow easier. We don’t see a tree as separate from the earth or the sky. It needs them all as much as we need it.

Leslie: How does a sense of a particular place or person(s) appear in your film/writing?

Mark: Sometimes when I’m walking, contemplating or observing other people. I see moments that can reach inside me and I feel a connection, for however brief a moment I empathize. It’s like the camera has stopped rolling and I’m seeing between the show yet, at the same time removed enough to find a voice for my protagonist. I love the moment in between. That moment when you’re looking a bit longer than you should. It has a beautiful tension. Creating that motion between the panels of our lives.

Leslie: Which writing/art/films of yours do you think of as the most important, most seminal, and why?

Mark: I think Tick Tock (1993) will always feel important. It was the moment I stepped from my shy interior and showed someone other than my closest friend what I could do.