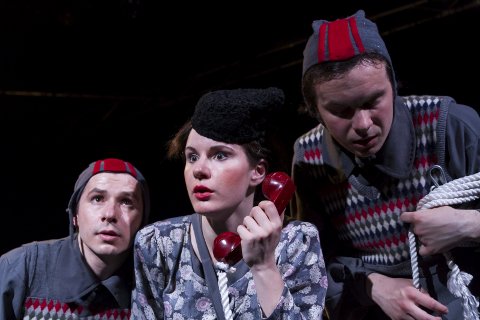 Writing from Norway, Bente Reimers Moe describes the diverse and exciting ways Norwegian children (and adults) are encouraged to enjoy the arts. Bente, who is a librarian and arts activist, gives this picture of central support for local cultural activity:

‘The Cultural Schoolbag, TCS, is a government-funded educational programme designed to give all Norwegian school students access to a wide range of quality art and culture.

Pupils in the town of Narvik, in the far north of Norway, were recently treated to a completely wordless play full of visual effects. The play, called Chook & Gek, adapted from a story written by Arkadiy Gaidar and staged by Melting Point, is one of the most popular moral stories of the Soviet period. The story follows a postman who is caught in a snow storm, on an icy plain. Memories from childhood become his salvation as he fights to stay alive. He remembers his brother Chook, the dreams they had together, and the games they used to play. He is reminded of his mother who loved them so much, and their father, who lived and worked in the far north. The postman imagines, or remembers, how one day his father will send for them, and they will leave the city with its tall buildings and bright lights and noise, to travel into the wilderness of the dark woods and the giant mountains.

So how would this strange, wordless production be received by the pupils? The answer was they were captivated, and reacted with laughter and tears.

Another recent example of TCS’s work is the award-winning film My Skinny Sister, created and directed by the Swedish film maker Sanna Lenken, and shown to pupils in the southern region of Norway. The film follows the relations between two sisters, their feelings of love, jealousy and betrayal, and what happens when the younger sister discover the older sister’s eating disorder. After the show Sanna arranged a meeting with the young audience for a conversation about the film’s themes.

TCS is funded from the Norwegian State Lottery. In 2015 the total amount granted was NOK 210 million (around £21 million).The administrative body of TCS is the Culture Tank, which is a government agency under the Ministry of Culture, and they cooperate with regions, municipalities and schools to support performances for youngsters all over the country. An advisory council has recently been established with participants appointed by the Ministry of Culture and the Ministry of Education and Research.

It is difficult for me to write about all this without smiling over some of the performances I remember seeing in my schooldays. Most memorable was the poet Jan Erik Vold, reciting his one-word poem, KULTURUKE (“cultural week” in English). We laughed and laughed as he started to recite the word in different ways, in different voices, and made funny anagrams of the word. Later he went on tour, accompanied by the now world-famous saxophonist Jan Garbarek. Everyone in my generation has experienced that performance, so I only need to say KULTURUKE to someone my own age, and we burst out in laughter. We know what it’s about, it is a part of our heritage.

I also remember another venture, launched some 10-12 years ago, called All Of Norway Sings. The idea was simply to have every Norwegian engaged in singing, on some level, be it in school, kindergarden, nursing home, at work, in a choir, at home, in the shower, in cinemas, in theatres – anywhere. The media soon picked up on the project, regularly reporting on its progress. 82 000 people were involved all over the country, and 551 choir concerts were arranged. From the project an idea-bank was made, with suggestions about how to use songs in cultural work. Among the ideas were:

After being involved in this project through my work at the time, I entered a local choir, and that has enriched my life. When you sing, you can’t get depressed, that is my experience!

There was a forerunner to TCS, called Concerts Norway, established in 1967 to strengthen regional music, with slightly more emphasis on artistic diversity than on educational goals. Concerts Norway helped local producers to arrange performances, to try out new ways of communicating with the public, and create musical workshops for pupils and students. Over the years Concerts Norway grew into a powerful cultural force with 75 full time regional positions producing and arranging over 10 000 concerts for audiences totaling more than 1.1 million during the 2000s. This included the annual Oslo World Music Festival (now Oslo World) and School Concerts, giving youngsters access to the best professional musicians and music from a variety of genres. The aim was to be both educational and formative for the children involved. In 2016 Concerts Norway changed its name to The Culture Tank, and took TCS under its wing.

It is hard to think of a better way to use the State Lottery money.’

You can read about ‘Student Participation in the Cultural Rucksack’ here.  After the short introduction in Norwegian the study is written in English.

Next week in CIRCUS UNLIMITED, I interview clown, juggler and unicyclist Julian Mount, who has been running a circus company for thirty years and is now a singer and acoustic guitarist.