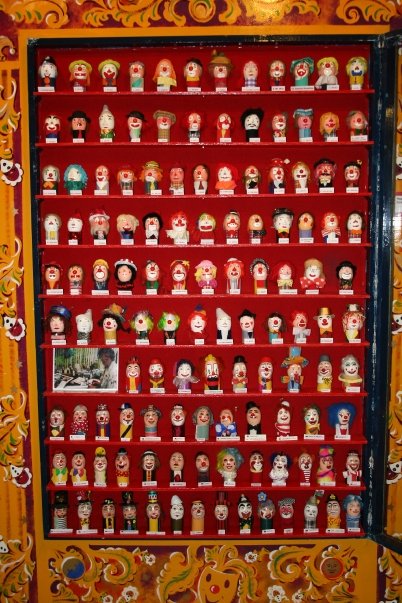 I interviewed clown, juggler and unicyclist Julian Mount, who has been running a circus company for thirty years. Julian is also a singer and acoustic guitarist and one of his songs ‘Big Red Noses’ has inspired an American film ‘Kinker’s Lament’.

I began by asking questions about Julian’s career with Circus Unlimited.

Leslie: Can you tell us, please, about how you learned and developed your range of circus skills? How have you applied your experience to helping other people to achieve similar skills?

Julian: I used to have a day job as a Human Resources trainer. I designed and ran training courses and events for business professionals in a range of business/personal development skills. One week, I was on a training course and one of the participants was just learning how to juggle. Something about it sparked my interest and it all started from there.

In the mid-1990s I ran a public Circus Skills Workshop every week in the local arts centre. It was very well attended as juggling (and other Circus skills) were the new craze back then.

I found that my training/teaching skills were useful to help others learn juggling, plate-spinning, diabolo, devil stick, unicycling and other Circus skills too. Some of the people who attended these workshops helped me to form a company called CIRCUS UNLIMITED! And, for around 30 years, we supplied Circus skills trainers for a range of events from birthday parties to village fetes, festivals, schools and company teambuilding events too! Aside from the Circus Skills Workshops, many of us (including me) became Clowns and we performed Circus shows for a wide range of clients of all ages at various public and private events.

Leslie: Who are the people who have helped you to find your style in circus? Who are the creative people you most admire – why them?

Julian: To me, Clowning is exaggerated reality with comedy thrown in. My heroes tend to be from the world of comedy rather than the Circus. I admire the wit and wisdom of Spike Milligan, John Cleese, Tommy Cooper and Morecambe and Wise. All these performers are, to me, Clowns without the make-up or costumes. HOW they do what they do often gets the laughs. Their body language often says more than the words they use. Their tone of voice and their craziness is what has contributed to their success and comedy. Their PERSPECTIVE on a given situation is often very different from what others see.

As a musician, singer and songwriter (three skills which occupy most of my time these days) I admire innovative artistes like me. Kate Bush, Pete Atkin and Jake Thackray to name but three.

Leslie: Could you expand, please, on your quote: ‘There’s a big difference between being able to juggle and being a juggler’?

Leslie: What have been your best and worst moments in circus? How have these helped you to improve your act?

Julian: I think it’s wider than just in the Circus. When I am performing and something goes well (eg: gets a good reaction) I’ll be sure to do that thing again. When something doesn’t work so well (a song or a Circus routine) it gets changed or dropped. The reaction of the audience is so important. As a ‘performance artiste’ I am there to entertain. If I’m not doing this effectively, I need to change what I’m doing and/or how I’m doing it.

Some of the best moments have come about due to things going wrong! Once, three Clowns (one of them was me) were doing a show involving progressively bigger unicycles. The last one was so big that the Clown riding it had to use a nearby skip to get on it! Unfortunately, he overbalanced and ended up head down in the skip with just his gigantic Clown shoes sticking out the top. He had a radio mic. and all we could hear was his pleas to come and save him! The audience loved it and thought it was all part of the show. The other two Clowns got the most laughs for discussing whether they should help him…and when!

Some of the worst moments have been down to hecklers or drunks wanting their part of the action. Over the years I have developed strategies and jokes to deal with these people and turn their interruptions to my advantage. Life goes on.

Leslie: You play music and use musical metaphors quite often. Can you tell us where the four albums you have recorded came from – their style, themes and inspiration? How do your circus skills and musical skills work together or clash?

Julian: I’ve actually released NINE albums of music. The first one ‘Unsung Lies’ was in 1973 and now changes hands amongst record collectors on eBay for over £1,000! My latest CD “The Invisible Man” was released this year (2017) and is selling well. The songs I write are inspired by things I hear or see. My songs are funny – not belly-laugh funny, more chuckle funny. I write from a unique perspective of absurdity. One song (for example) is about the ‘dance’ around the supermarket we all do every week. Another is about how the Betterware catalogue describes its handy gadgets in terms of their BENEFITS rather than what they are. (“Reach right to the bottom of the jar” means a long spoon).

I sometimes perform songs as a Clown. I wrote a song about Clowns called ‘Big Red Noses’. This song is now sung by Clowns around the world and has recently inspired an American film ‘Kinker’s Lament’ which is currently doing the round of American film festivals.

Leslie: What are the rules of original, effective performance? How do you aim to keep your performances up to the highest possible standard?

Julian: When you’re a performer, I think it’s important that you keep focus on what you are there to do. Don’t get side-tracked or diverted. You need a USP (unique selling point). In music, mine is the type of songs I write. In Circus, it’s my Clown character, Circus skills, make up and costume. To keep performances up to standard you need to practice. 80% practice and preparation, 20% performance. Don’t let anyone tell you different!

Leslie: What is clowning? Is it an instinct or a learned skill? Is it implicit in other areas of human expression – if so how?

Julian: A Clown is an exaggerated human being. He or she has larger than life clothes, shoes, face and personality. He or she can do things that other people can’t although they often do things wrong in an entertaining way. A Clown doesn’t have the seriousness of an adult. Many say that Clowning can be learned. I’m not so sure. I think you need a Clown base to build on and some people are FAR too serious about life…and themselves.

With the positive and gentle characteristics of real Clowns, it’s a shame that the spectre of “Scary Clowns” or “Killer Clowns” still persists. Clowns are less popular these days due to Stephen King’s book and film “It”. There are many more forms of (mostly electronic) entertainment today. I fear the Circus Clown is a dying art form which may well disappear soon at the expense of innocent fun, laughter and joy. I hope I’m wrong because in my music, songs and Circus skills I will ALWAYS be a Clown and proud to be one too.

Next week I interview author Chitra Soundar about diversity in children’s writing and her own books.