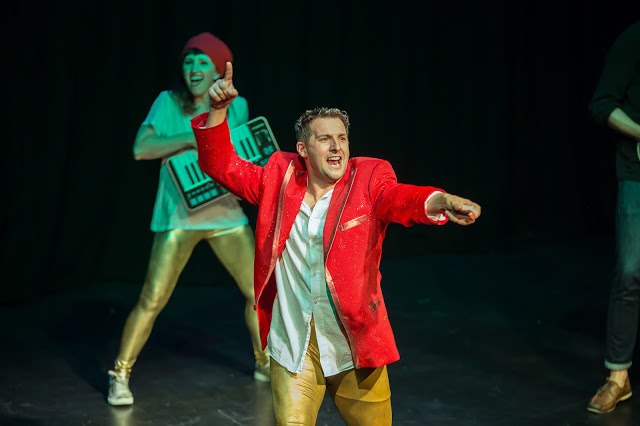 Leslie: How did your interest in theatre-circus begin, grow and develop?

Lucy: Organically… When I first moved to London to work as a trainee accountant in my 20s, I remember going to The Roundhouse to see an Argentine company called De La Guarda (now Fuerzabruta) where performers bungeed through a paper ceiling above us, signaling an evening of anarchic, surreal, madcap fun. They would clown around with the audience, rifling through bags (well, mine anyway) and sweep the odd spectator into the air. I remember thinking I would love to have a go.

Around the same time I bumped into an old university friend who was going to recreational classes in trapeze at what was then Circus Space (now The National Centre of Circus Arts, aka National Circus). With a history of being the last to be chosen on any sports team, and never having done any dance or gymnastics, I assumed it was out of my league, but the seed was planted, and surreptitiously grew.

Fast forward 15 years or so, and I was a worn out mother of three young children, who, in a last ditch attempt to get some mojo back, signed up to a ‘circus experience’ afternoon at National Circus, persuading a dozen girlfriends to come along for the ride. By chance it happened to be International Women’s Day, we were a hotch-potch of nationalities, and there was a television crew from the BBC world service filming for a travel documentary. Amazing how much braver you can be stepping off a trapeze platform when a camera is pointing straight at you! We had a blast, and within a matter of weeks I had signed up with a girlfriend to evening classes. Inspired by the ‘Slummy Mummy’ column in The Times I used to read, I thought I’d write a jokey blog about the adventures of a Slummy Mummy who runs off to the circus. But then I found so much happening in the circus scene around me, by chatting to teachers who were also performers, that I fell into writing about the shows they were in as well.

The blog wasn’t so much meant to be a series of reviews as responses, a way of engaging with circus as my muse. Adrian Berry, the Artistic Director of Jacksons Lane, a theatre that is the incubator of the contemporary circus scene, encouraged my writing and invited me behind the scenes and along to all sorts of inspiring events. Jacksons Lane is a flagship space, sponsoring the award for circus at the Edinburgh Fringe, supporting UK companies, and building bridges internationally, Finland for me has been a particularly eye-opener! Then Adrian invited me to curate my own cabaret at Jacksons Lane as part of the summer Postcards Festival, with performers I’d met along this journey. This resulted in ‘Shhh!’, where Cirque de Soleil clown Sean Kempton weaved material around a dozen acts in partnership with his wife, trapeze artist extraordinaire and regular funny lady Michaela O’Connor. It played to a sold-out house and we were invited back the following year with new acts, which is where I met you in person Leslie, thank you again for coming all the way down!

Leslie: You’re passionate about circus as an expressive art form. When did this type of theatre-circus begin? How has it grown and changed? Who are the movers and shakers in this branch of circus?

Lucy: That is very much a hot topic at the moment with 2018 being the 250th anniversary of the birth of circus in the UK, in Philip Astley’s equestrian sawdust ring, where clowns and acrobats would tumble around to keep the crowds entertained in transition breaks between the tricks on horsebacks. The sawdust ring eventually morphed into the big top as we know it today.

Currently Circus250, set up by Dea Birkett, is the umbrella organisation co-ordinating all manner of circus spectacular events in one of the six designated ‘Circus Cities’ which are Bristol, Blackpool, Norwich & Great Yarmouth, Newcastle-under-Lyme, London, and Belfast.

It will be a celebration of circus everywhere, both circus found in traditional big tops and in the contemporary scene, as well as shows that bring the two together. I am based in London, so most familiar with the circus happening there but there is so much else happening elsewhere – take the biennial Circus City festival in Bristol this October, run by Lina Frank and Kate Hartoch, and a whole (LED!) umbrella of events staged by Bristol-based Cirque Bijou as well.

In terms of circus as an expressive art, Cirque de Soleil undoubtedly changed and expanded the landscape over the past few decades. In the UK, the contemporary circus scene has been developing over a number of years, propelled certainly by the Millennium Experience project run by the Generating Company for the Dome. This has led to the creation of the first accreditation programme at Circus Space necessary to train up over 80 circus artists for the installation, and significant investment going forward. Following the success of immersive productions like GC’s Storm at Circus Space, more and more companies began making experimental work, on their own and/or with support from theatre spaces and Arts Council funding. This brought circus from a marginal art form to centre stage. Being able to study Circus Arts now as a degree, at the National Circus in London and Circomedia in Bristol, as well as a number of other courses around the UK, has encouraged further experimentation and diversity from students. The Edinburgh Fringe award for circus, sponsored by Jacksons Lane and Total Theatre, promotes this still further. The Roundhouse in Camden has just had an incredible biennial programme this Spring for CircusFest. Other theatre partners promoting circus in London are the Arts Depot and The Albany, while Jude Kelly, Artistic Director of the Southbank, is also a circus fan and that is reflected in the programme with a whole host of stellar shows as part of Underbelly.

There are so many great companies forging a way ahead in circus and leading the way in developing talent. Cardiff-based NoFit State is on the largest scale, and runs the flagship spectacular for Circus250. I saw their landmark show Bianco at The Roundhouse 15 years ago, and then again on the Southbank last Christmas. It’s a poetic and intensely romantic circus promenade. Ockham’s Razor is the much-fêted leading aerial company in the UK, together with the acclaimed and prized Tipping Point. Mimbre is the leading all-female acrobatic company that produces empowering and moving shows. I loved their wondrous strange melee as part of RSC celebrations for Shakespeare’s birthday. In terms of creative producers, Crying Out Loud and Turtle Key Arts are the ones to watch.

To have voices speaking up about circus is important to raise the profile of circus as an art. Informed theatre critics writing about circus in the broadsheets are Lyn Gardner, Donald Hutera and Matt Trueman, and author Lucy Ribchester writing for The List up in Edinburgh. Then there is also the critical voice of Katherine Kavanagh’s blog which is a mine of information. Interviews with circus performers by The Widow Stanton are fascinating and give insider insight. In terms of London-based reviews there is This Is Cabaret and Velvet Box Office (originally a listings site) posting circus and cabaret reviews.

Leslie: Is there a ‘circus-type personality’ and community characteristics that go with living and working together in circus? How would you characterise them? Do circus people come mainly from some particular backgrounds/walks of life?

Lucy: I define circus as a state of mind: open-minded, fun, flexible, curious, strong, a free spirit, prepared to take risks and welcoming to people from all nations and all walks of life. Time and again, whether in traditional big tops or in the contemporary circus scene, those are the qualities I find in the people I meet.

The circus community is very much like one large family that looks out, and looks after, its own. The majority of circus artists I meet are very principled and generally liberal in outlook. It is very international as well – performers travel for work, for festivals and for new learning opportunities – so I would say it is characterised by a diversity of backgrounds drawn together by shared ideals or commitment to their art form. When performers have been in a show or a company together there is a bond created not just from a shared experience but from entrusting their physical safety to each other – whether it be another performer in the act, or a rigger in the wings. I found that with my classmates when training, and in putting on a show myself, so I am extrapolating partly from experience, as well as observing from the margins.

Next week, in Part Two of Lucy’s interview, she shares what she’s learned from training for the circus as well as her personal recommendations for shows to watch.